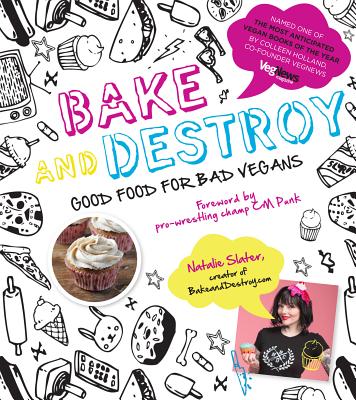 Vegan Recipes That'll Punch Your Taste Buds in the Mouth

Natalie Slater has been described as "Martha Stewart meets Iron Maiden," taking vegan cooking to places it has never been before. Influenced by slasher films, pro-wrestling, punk rock and heavy metal, her quirky-yet-delicious comfort foods are a refreshing take on vegan eating with award-winning flavors. Along the way, her off-color humor, irreverent rants and density of pop-culture references will make you laugh out loud.

Inside this high-energy cookbook you'll find recipes for Bike Messenger Brownies inspired by the espresso-infused chai latte these speed demons use to fuel up; and Crouching Cornbread, Hidden Broccoli Natalie's sneaky way of getting her son to eat vegetables. Other creations include the Grilled Mac n' Cheez Sandwich, Taco Lasagna, Chick-O Cheesecake, and her Shepherd's Pie Pizza, about which she writes, "Some people were born to rock n' roll. Others were born to ride. I was born to put mashed potatoes on pizza."

"Bake and Destroy" was named one of the most anticipated cookbooks of the year by VegNews.


Praise For Bake and Destroy: Good Food for Bad Vegans…

"Bake and Destroy is like a party on every page. Natalie Slater doesn’t shy away from over-the-top, knock-your-socks-off recipes you will find yourself making again and again."

"[Natalie] does it all with a sharp wit and a punk-rock, can-do attitude that has become her signature and inspired people all around the world."

Natalie Slater is the creator of bakeanddestroy.com with more than a half-million hits a month. She was the winner of the Cooking Channel's "Perfect Three Contest" and has served as a judge on Food Network's Cupcake Wars. She resides in Chicago, Illinois with her husband and son.
Loading...
or
Not Currently Available for Direct Purchase