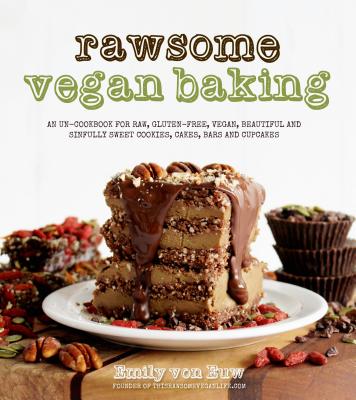 Emily Von Euw, creator of the popular blog This Rawsome Vegan Life, makes treats that are so phenomenal and so stunning they should be considered masterpieces. Oh yeah, and they're raw, vegan AND gluten-free. So whether you're a vegetarian, a raw vegan or even a meat-lover just looking for something healthy, new and delicious, this book has something for you.

Emily's popular blog won the Vegan Woman's 2013 Vegan Food Blog Award, was named one of the Top 50 Raw Food Blogs of 2012 and is nominated for "Favorite Blog" for the 2013 VegNews Veggie Awards. Every recipe is accompanied by a photograph so you can see each brilliant sweet before you eat.

Emily's beautiful and easy-to-make recipes, like her Peppermint Chocolate Molten Lava Cakes, S'mores Cupcakes and Go-Nuts Donuts with Frosting & Fruit Sprinkles, are so tasty that you won't even realize they're vegan. Quite simply, Rawsome Vegan Baking will wow your taste buds and impress your friends and family with new great tastes in dessert.

“Emily's blog has the type of recipes that would get any foodie excited about raw vegan cuisine.” —Russell James, The Raw Chef

“Emily is a creative genius when it comes to dreaming up colorful, beautiful, whimsical and delicious recipes. She is one of my favorite vegan bloggers and I can't wait to see what adventure she takes us on in her upcoming cookbook.” —Kathy Patalsky, Healthy-Happy-Life.com

“Emily is incredible. Her recipes are some of the most creative and drool-inducing I've ever seen. I wait with anticipation for every new thing she produces. This (un)cookbook is no exception.” —Jessica Ainscough, The Wellness Warrior

“Who knew raw food can be so surprisingly creative? Emily takes raw foodism to new levels that wow us every single time.” —Sivan Pardo Renwick, The Vegan Woman

Emily von Euw is the creator of the blog This Rawsome Vegan Life, which gets over nearly 1 million views a month. Emily's blog won The Vegan Woman's 2013 Vegan Food Blog Award, was named one of the Top 50 Raw Food Blogs of 2012 and is nominated for "Favorite Blog" for the 2013 VegNews Awards. Her recipes have been featured on Shape.com, SkinnyLimits.com and AscensionKitchen.com. Emily lives in British Columbia, Canada.