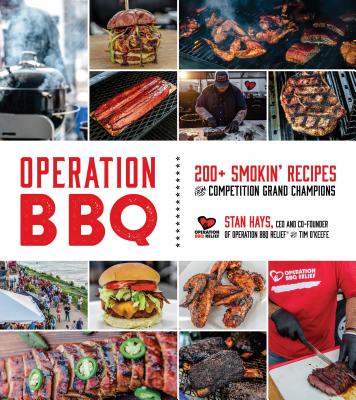 The Most Comprehensive Collection of Award-Winning BBQ Recipes in Print

Operation BBQ is a compilation of recipes from championship-winning barbecue teams who volunteer for disaster relief efforts across the United States. These unsung heroes develop BBQ dishes that wow crowds and judges everywhere, and then help feed displaced residents and emergency personnel—putting the “comfort” in “comfort food.”

Here, more than 70 teams of grand and world champion pitmasters bring their prized recipes and powerful stories to life in this exceptional cookbook. You don’t have to be a master chef to make these recipes; they have been scaled for the home cook wielding tongs at a backyard barbecue. Learn from the best in the business how to make Bone-Sucking Baby Back Ribs, Jalapeño and Applewood Bacon Burgers, Jack Daniel’s Whiskey–Infused Steak Tips, Chicken Satay Skewers with Sweet and Spicy Peanut Sauce and Raging River Maple-Butter Crusted Salmon, as well as casseroles, stews, side dishes and desserts that can be cooked on the grill.

“There’s nothing more American than helping those in need . . . except maybe great barbecue. And Operation BBQ Relief has combined them both. Check out this book to learn more about how to do the same.” —Guy Fieri, chef, restaurateur, author and host of Diners, Drive-Ins and Dives

“Feeding someone delicious food who really, really needs it? That’s as good as it gets. Operation BBQ Relief does exactly that and they do it better than anyone I know. Read this book and then go cook for someone.” —Carl Ruiz, celebrity chef and restaurateur

“There are so many amazing recipes in this book. If you buy only one cookbook this year, Operation BBQ needs to be it.” —Aaron May, Food Network judge and official chef of the Players Tailgate

Stan Hays is the co-founder and CEO of Operation BBQ Relief®. As a barbecue competitor, he has participated in more than 35 sanctioned barbecue contests with two grand champion awards, four reserve champions and several top-ten finishes. He was also runner-up on Chopped Grill Masters on the Food Network. Operation BBQ Relief® has now served more than 1.78 million meals in 25 states.


Tim O’Keefe is a certified barbecue judge who has judged over 40 contests sanctioned by the Kansas City Barbeque Society, and has been part of the Can U Smell My Pits competition team since 2015. Tim has contributed articles for National Barbecue News, and he co-wrote three cookbooks with pitmaster Bill Gillespie.