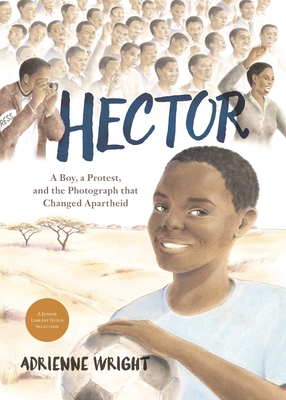 A Boy, A Protest, and the Photograph that Changed Apartheid

On June 16, 1976, Hector Pieterson, an ordinary boy, lost his life after getting caught up in what was supposed to be a peaceful protest. Black South African students were marching against a new law requiring that they be taught half of their subjects in Afrikaans, the language of the White government. The story’s events unfold from the perspectives of Hector, his sister, and the photographer who captured their photo in the chaos. This book can serve as a pertinent tool for adults discussing global history and race relations with children. Its graphic novel style and mixed media art portray the vibrancy and grit of Hector’s daily life and untimely death.

Heartbreaking yet relevant, this powerful story gives voice to an ordinary boy and sheds light on events that helped lead to the end of apartheid.


Praise For Hector: A Boy, A Protest, and the Photograph that Changed Apartheid…

* "A tragic but inspiring story about an event in South Africa's history that must never be forgotten."
– Kirkus Reviews, starred review

* “Nzima’s powerful photograph—the one that caught the world’s attention—is distinct yet seamlessly integrated in this unique account.” – Booklist, starred review

"Wright’s deliberately paced, highly visual narrative captures a traumatic moment with piercing clarity and doesn’t shy from including the photograph upon which the story is based." – Publishers Weekly

Adrienne Wright, a debut author-illustrator, grew up in South Africa and graduated from the College of Art and Design in Johannesburg. She has experience in illustration, art direction, and graphic design with various ad agencies. She lives with her family in King of Prussia, Pennsylvania.
Loading...
or
Not Currently Available for Direct Purchase