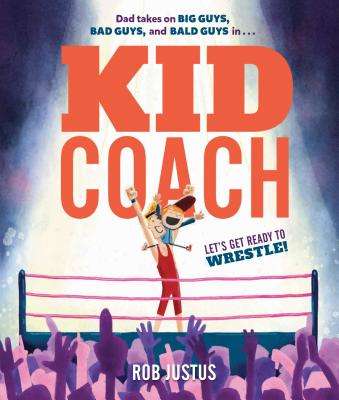 Kid Coach takes couch potatoes and turns them into champions. And no one is a bigger couch potato than Dad. It will take all of Kid Coach’s expertise to get Dad off the couch at all let alone in fighting form for the local Wrestle-Rumble-Mania-Kingdom Tournament of Champions. Dad will have to go up against big guys, bald guys, bad guys, and even… big bald bad guys! But soon Kid Coach learns that while training a champion may be tough, teaching Dad to be a good sport might be even tougher. Can Kid Coach get Dad to tap out before he becomes big, bald, bad guy toast?

Rob Justus spent a decade as an award-winning market researcher before deciding to pursue his passion for illustration and creative storytelling. Drawing inspiration from nature, human observation, Rob loves to create stories that capture the wonder and excitement of childhood and the joy of exploration. Kid Coach is his debut book. He lives in Ottawa, Canada.

"Large, flashy illustrations capture the playful energy of the narration and lend to sharing the book with a storytime audience... Justus presents a valuable lesson about integrity and kindness." – Kirkus Reviews

"[D]azzling with colorful, energetic illustrations. The father-son role reversal, along with a healthy dose of potato puns, provides plenty of laughs." – Booklist

"A playful title to remind readers that important lessons about sportsmanship can be learned at any age."
– School Library Journal

"This romp of a readaloud has a lot of character, and whether viewers are wrestling fans or not, they are sure to get a chuckle out of Kid Coach’s antics with couch-potato-turned-pro-wrestler Dad... This would be an excellent choice for a discussion of that hard-to-grasp concept of sportsmanship, as well as just being pure wacky fun."
– BCCB