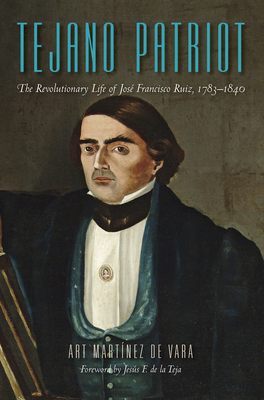 Art Martínez de Vara’s Tejano Patriot: The Revolutionary Life of José Francisco Ruiz, 1783–1840 is the first full-length biography of this important figure in Texas history. Best known as one of two Texas-born signers of the Texas Declaration of Independence, Ruiz’s significance extends far beyond that single event.  Born in San Antonio de Béxar to an upwardly mobile family, Ruiz underwent a dramatic transformation from a conservative royalist to one of the staunchest liberals of his era during the war for Mexican independence

Steeped in the Spanish American liberal tradition, his revolutionary activity included participating in three uprisings, suppressing two others, and enduring extreme personal sacrifice for the liberal republican cause. He was widely respected as an intermediary between Tejanos and American Indians, especially the Comanches. As a diplomat, he negotiated nearly a dozen peace treaties for Spain, Mexico, and the Republic of Texas, and he traveled to the imperial court of Mexico as an agent of the Comanches to secure peace on the northern frontier. When Anglo settlers came by the thousands to Texas after 1820, he continued to be a cultural intermediary, forging a friendship with Stephen F. Austin, but he always put the interests of Béxar and his fellow Tejanos first.

Ruiz had a notable career as a military leader, diplomat, revolutionary, educator, attorney, arms dealer, author, ethnographer, politician, Indian agent, Texas ranger, city attorney, and Texas senator. He was a central figure in the saga that shaped Texas from a remote borderland on New Spain’s northern frontier to an independent republic.

ART MARTÍNEZ DE VARA is a historian, author, and attorney. He holds a master of arts in history from Sam Houston State University and a doctorate in law from St. Mary’s University.  He is an adjunct faculty at Our Lady of the Lake University and served as mayor of Von Ormy, Texas, from 2008–2015. He is the author of several books and the winner of the 2016 Texas State Genealogical Society Grand Prize Book Award and the 2014 Presidio La Bahia Award.