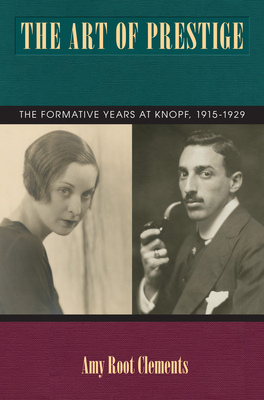 The Art of Prestige

The Formative Years at Knopf, 1915-1929 (Studies in Print Culture and the History of the Book)

In the American book trade, Alfred A. Knopf, Inc., and its inimitable logo featuring a borzoi wolfhound have come to signify the pinnacle of prestigious publishing. Launched in 1915 by a dynamic twenty-two-year-old and his refined fianc e, Blanche Wolf, the firm soon developed a reputation for excellence, quickly overcoming outsider status to forge a unique identity that has endured well past its founders' lifetimes. Capturing the little-known early history of Knopf, The Art of Prestige explores the origins of the company's rise to success during the Jazz Age, when Alfred and Blanche established themselves as literary impresarios on both sides of the Atlantic. Drawing on key archival documents from all phases of the publishing process, Amy Root Clements reconstructs the turning points and rhetorical exchanges that made Knopf's initial books noteworthy, from the acquisitions process to design, consumer marketing, and bookselling. Lasting cornerstones of the young firm include alliances with pivotal figures in the world of graphic arts and book production and with European publishers who brought numerous Nobel Prize winners to the Borzoi list during the company's first fifteen years. Other featured luminaries include the American authors Willa Cather, Dashiell Hammett, and Langston Hughes. The Art of Prestige also examines Alfred Knopf's ancestry, up-bringing, and formal education at Columbia, as well as his apprenticeships with Frank Nelson Doubleday and Mitchell Kennerley--factors that would influence his business decisions for years to come. The result is a portrait of innovative branding that seamlessly merged book production with book promotion in a literary landscape that was ripe for transformation.

Amy Root Clements is assistant professor of English at St. Edward's University. She previously served as an advertising and promotion manager for several publishing houses. For her book trailer, please see http: //bit.ly/1qS5eQq And for more information about the author, please see http: //amyrootclements.net/
Loading...
or
Not Currently Available for Direct Purchase