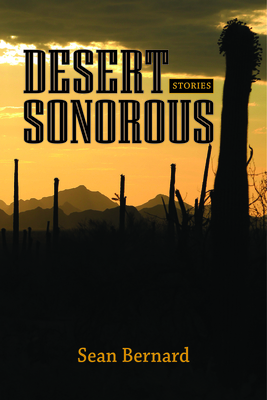 Undercover space aliens share an RV outside Tucson. A high school girl tries to make sense of the shooting of Gabby Giffords. Basketball fans stalk their team's head coach. A young couple falls in and out of love over the course of several lifetimes. And teenage cross-country athletes run on and on through these ten stories set amid the strange desert landscapes of the American Southwest.

Desert sonorous is a unique and energetic debut collection, blending realism with flashes of experimentation. Contemporary issues—immigration, drought, shootings—hover above a cast of memorable characters in search of life's deeper meanings. As they struggle along, comic and resigned, intelligent and quiet, sad and frustrated, their strivings resound because their lives are in so many ways our own.

"This collection works by stealth, like alien lights sweeping over a desert plain. All the wreckage of American life, Tucson style, is here on display: the margaritas and air-conditioning, the lost believers caught in a life most theirs the moment before it slips from their palms. What Sean Bernard does so well, with his versatile rhythmic style, is to get you to care about such overheated characters, all of them aliens. What appears in one story disappears in another, and you, reader, become complicit. Should we celebrate Bernard as our newest bard of the desert? Yes, as surely as America is on a remote 24/7 hum, throbbing alongside its desert highways."—Edie Meidav, Juniper Prize for Fiction judge and author of Lola, California

"These ten piercing cries coming from the merciless furnace of the American Southwest desert are haunting almost beyond description. They palpably evoke the struggles of people 'in the wilderness years' when their potential is in threat of being extinguished. With wisdom and sensitivity, they present the disturbingly beautiful innermost dramas of aftermath."—Kevin McIlvoy, author of The Complete History of New Mexico: Stories and Hyssop

"Bernard displays a sure hand at narrative and an impressive gift for portraying characters who seek to escape the confines of life as it's lived in this corner of American desert."—Foreword

"Inspired . . . "Rattle" concludes the book with almost 10 pages of loosely related thoughts about Tucson and the desert, sometimes no longer than a single word. This section reads more like poetry, or a series of micro-essays, than fiction. I've actually never read anything quite like it, and while some readers might object to such an undefined ending, I found it to be a beautifully creative way for Bernard to finish his book about "the Old Pueblo.""—Dr. Seth Horton, El Paso Times

"Fiction that leaves one parched . . . and sometimes wanting more."—Kirkus

Sean Bernard, a graduate of the Iowa Writers' Workshop, is associate professor and director of the undergraduate creative writing program at the University of La Verne in Southern California and editor of the literary journal Prism Review. His stories have appeared in numerous literary magazines, including Santa Monica Review, Glimmer Train, Gigantic, and LIT. He has received fellowships and awards from the National Endowment of the Arts, Poets and Writers, and the University of Arizona Poetry Center.
Loading...
or
Not Currently Available for Direct Purchase