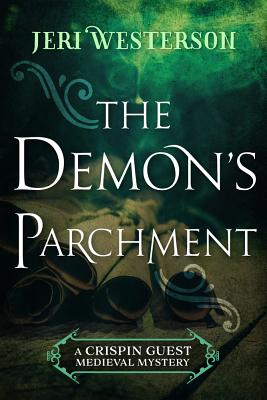 Since losing his knighthood for treason and reinventing himself as an investigator for hire known as The Tracker, Crispin Guest has grown accustomed to unusual clients with dark requests. Yet when Jacob of Provencal, a Jewish physician at the King’s court arrives at his doorstep late one frigid night, Guest cannot quiet his unease. Jacob and his son Julian are missing a set of documents, items they claim contain a spiritual and deadly power that, in the wrong hands, could bring forth a demon and put all of London in danger.

Meanwhile, there is evidence that a monster has already been unleashed in the city. Vulnerable street children are being abducted and murdered, their mutilated bodies the only clues left behind. With the help of his orphaned young servant Jack, it is up to Guest to unravel the grim tangle of mystery and murder that has taken over the wintry streets of London. Along the way, he encounters old enemies, finds friends in unexpected places, and has his long held convictions challenged at every turn.

This third installment of the Crispin Guest medieval mystery series was nominated for a Romantic Times award and was a finalist for the Macavity Award. The Demon’s Parchment is a gripping, vividly told story that will leave even the most seasoned mystery readers guessing until the very end.

Jeri Westerson is the author of the Crispin Guest Medieval Mysteriy and the Booke of the Hidden series. Her books were finalists for several major mystery awards, including the Agatha, the Shamus, and the Macavity. She lives in Menifee, California.
Loading...
or support indie stores by buying on