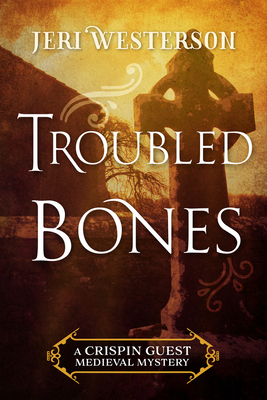 Since losing his knighthood, Crispin Guest has crafted a reputation throughout London. From the shadowy corners of the city to the exclusive halls of the royal court he is known as the Tracker, an investigator for hire who can find anyone or anything. But when the Archbishop of Canterbury hires him to expose the culprit threatening the sacred relics of a holy martyr, Guest finds himself a stranger in an unfamiliar land.

Within a city of pilgrims and priests, he unexpectedly encounters his former friend Geoffrey Chaucer, poet, rabble-rouser and liege to Crispin’s former master. Chaucer and his group of fellow pilgrims all have tales to tell...and secrets to hide. After a murder befalls the cathedral, Guest, together with his faithful servant Jack, has been tasked with uncovering the dark truth. Among hallowed tombs of soldiers and saints, in a world of ancient secrets and undying vendettas, Guest must identify the murderous heretic among holy men if he has any hope of returning home.

The riveting fourth book in the Crispin Guest series re-imagines the world of The Canterbury Tales in an engaging, suspenseful mystery. Troubled Bones was nominated for the Macavity, the Agatha, Romantic Times Reviewers' Choice, and the Bruce Alexander Historical Mystery awards.

Jeri Westerson is the author of the Crispin Guest Medieval Mysteriy and the Booke of the Hidden series. Her books were finalists for several major mystery awards, including the Agatha, the Shamus, and the Macavity. She lives in Menifee, California.
Loading...
or support indie stores by buying on
(This book is on backorder)