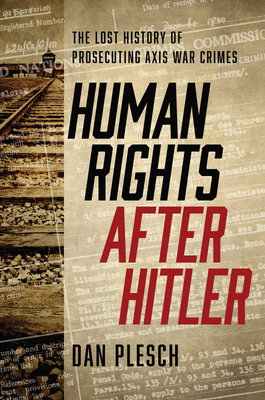 By Dan Plesch, Benjamin B. Ferencz (Foreword by)

Human Rights after Hitler reveals thousands of forgotten US and Allied war crimes prosecutions against Hitler and other Axis war criminals based on a popular movement for justice that stretched from Poland to the Pacific. These cases provide a great foundation for twenty-first-century human rights and accompany the achievements of the Nuremberg trials and postwar conventions. They include indictments of perpetrators of the Holocaust made while the death camps were still operating, which confounds the conventional wisdom that there was no official Allied response to the Holocaust at the time. This history also brings long overdue credit to the United Nations War Crimes Commission (UNWCC), which operated during and after World War II.

From the 1940s until a recent lobbying effort by Plesch and colleagues, the UNWCC's files were kept out of public view in the UN archives under pressure from the US government. The book answers why the commission and its files were closed and reveals that the lost precedents set by these cases have enormous practical utility for prosecuting war crimes today. They cover US and Allied prosecutions of torture, including "water treatment," wartime sexual assault, and crimes by foot soldiers who were "just following orders." Plesch's book will fascinate anyone with an interest in the history of the Second World War as well as provide ground-breaking revelations for historians and human rights practitioners alike.

Dan Plesch is director of the Centre for International Studies and Diplomacy at SOAS, University of London. He is the author of America, Hitler and the UN, coeditor of Wartime Origins and the Future United Nations, and has been a frequent contributor to the Guardian and other media.
or support indie stores by buying on
Copyright © 2020 American Booksellers Association