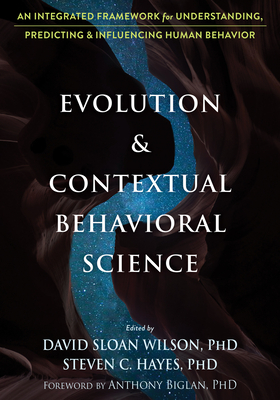 An Integrated Framework for Understanding, Predicting, and Influencing Human Behavior

What do evolutionary science and contextual behavioral science have in common? Edited by David Sloan Wilson and Steven C. Hayes, this groundbreaking book offers a glimpse into the histories of these two schools of thought, and provides a sound rationale for their reintegration.

Evolutionary science (ES) provides a unifying theoretical framework for the biological sciences, and is increasingly being applied to the human-related sciences. Meanwhile, contextual behavioral science (CBS) seeks to understand the history and function of human behavior in the context of everyday life where behaviors occur, and to influence behavior in a practical sense. This volume seeks to integrate these two bodies of knowledge that have developed largely independently.

In Evolution and Contextual Behavioral Science, two renowned experts in their fields argue why ES and CBS are intrinsically linked, as well as why their reintegration--or, reunification--is essential. The main purpose of this book is to continue to move CBS under the umbrella of ES, and to help evolutionary scientists understand how working alongside contextual behavioral scientists can foster both the development of ES principles and their application to practical situations.

Rather than the sequential relationship that is typically imagined between these two schools of thought, this volume envisions a parallel relationship between ES and CBS, where science can best influence positive change in the real world.

Editor David Sloan Wilson, PhD, is president of The Evolution Institute and a SUNY distinguished professor of biology and anthropology at Binghamton University. He applies evolutionary theory to all aspects of humanity in addition to the biological world. His books include Darwin's Cathedral, Evolution for Everyone, The Neighborhood Project, and Does Altruism Exist? ​Editor Steven C. Hayes, PhD, is foundation professor in the department of psychology at the University of Nevada, Reno. An author of forty-four books and over 600 scientific articles, his career has focused on an analysis of the nature of human language and cognition, and the application of this to the understanding and alleviation of human suffering and the promotion of human prosperity. He has received several awards, including the Impact of Science on Application Award from the Society for the Advancement of Behavior Analysis, and the Lifetime Achievement Award from the Association for Behavioral and Cognitive Therapies (ABCT).
or support indie stores by buying on
Copyright © 2020 American Booksellers Association