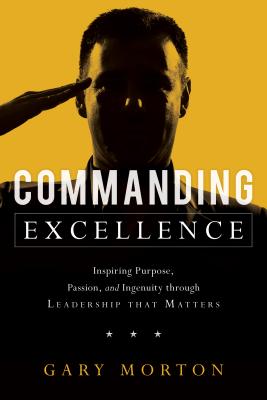 Inspiring Purpose, Passion, and Ingenuity Through Leadership That Matters

Truly engaging people is not about commanding them to do something; it is about getting them to command themselves to do it. West Point distinguished graduate Gary Morton knows how to deliver exceptional results while doing just that. As a platoon leader and tank commander in Army Task Force 4-68 and, later, as a young vice president at medical device manufacturer Stryker, Morton learned under two legendary leaders who, despite different styles, followed nearly the same steps to achieve results most considered unattainable.

In only a year, Task Force 4-68's commander, Lt. Colonel Alfred L. Dibella, turned one of the Army's poorest performing units into the most lethal, combat-ready task force in the US Army. In simulated-combat missions at the grueling National Training Center, Dibella's task force defeated the constantly triumphant OPFOR in every battle. This feat has never been repeated. Generals and commanders at every level sought to understand how this unit did the impossible.

When John W. Brown became CEO of Stryker, it was a boutique medical device firm with a few innovative products and $17 million in sales. Under Brown's extraordinary leadership it evolved into a $4 billion market leader feared by competitors and highly regarded by healthcare professionals. Stryker accomplished this remarkable run by securing 20-percent earnings growth every quarter, every year--for twenty-eight years. Again, this is a feat experts believed unachievable.

​By explaining the ingredients of these two leaders' secret sauce, Morton lays the foundation for current and future leaders to ensure their own teams excellence.

West Point distinguished graduate Gary Morton had a five-year career as a tank officer, the highlight of which was being part of an extraordinary unit that achieved unprecedented results at the US Army's grueling National Training Center--the only unit to ever win every simulated battle it fought. Gary also graduated with an MS degree from the University of Southern California with honors. After the Army, he joined medical-device manufacturer Stryker, where he held positions of increasing responsibility in project management, engineering, R&D, operations, marketing, and business leadership, all culminating in twelve years as Vice President and General Manager of the EMS equipment business that he cofounded. An innovative juggernaut, Stryker EMS grew to become the global leader in patient-handling equipment for the ambulance market. His team introduced game-changing products that have redefined how paramedics handle patients in emergency situations throughout the developed world. Today, he is retired from Stryker and lives with his wife in the Midwest, where he writes and invests. You can learn more at www.iGaryMorton.com.
Loading...
or
Not Currently Available for Direct Purchase