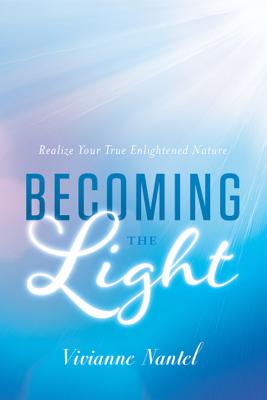 From untruth to truth, darkness to light, ignorance to enlightenment, this is Vivianne Nantel's journey. Intimately chronicling Vivianne's quest to overcome a battered childhood, survive depression, advanced breast cancer, and near-death experiences, along with her journey seeking in India Becoming the Light is more than a compelling spiritual memoir; it is a moving odyssey.

You can join the author as she walks the spiritual path with several enlightened masters such as Yogiraj Gurunath Siddhanath, His Holiness Sri Sri Ravi Shankar, His Holiness the Dalai Lama, and Vasudev Sadhguru Jaggi.

Becoming the Light: Realize Your True Enlightened Nature can be a gateway to unleashing your true and blissful nature. Filled with wisdom and spiritual knowledge, it is a narrative of duality and transcendence expressed in all its nuances. Vivianne shares invaluable knowledge about--
- the science of yoga
- consecration and mysticism
- the many forms of love
- transcendence in the pursuit of self-realization
​Whether you are already on a journey for well-being and enlightenment or just at its threshold, may this book provide the insights, inspiration, and courage you need in order to find your way.

Vivianne Nantel, who is often called Devi, is a yogini, spiritual guide, visionary, mystic, vocalist, humanitarian, speaker and author of Becoming The Light: Realize Your True Enlightened Nature. Vivianne graduated magna cum laude with a Bachelor of Fine Arts from San Francisco State University. As a published writer and poet, Ms. Nantel's work has appeared in Yoga Magazine, Poet's Paper, the National Literary Journal and Animal Wellness Magazine, among others. In addition, Vivianne is a visionary artist and prolific painter whose artwork has been exhibited in museums, fine art galleries and private and corporate collections. Though she stopped working as a fine art artist after going through her cancer journey in 2007-08. Articles about Vivianne Nantel's work have been published in The San Francisco Chronicle, the Independent Florida Sun and Alaska's World magazine. In addition, Vivianne has been interviewed on various television talk shows including Earth Advocate and Bridging Heaven and Earth and appeared in the documentary film Harp Seals by the Sea Shepherd Conservation Society. Vivianne has also volunteered for many animal welfare initiatives. She has spoken at the National Animal Rights Conference, in Washington, DC, and collaborated on special projects with the Humane Society of the United States (HSUS) & Humane Society International (HSI). As part of her passion, Vivianne spent more than two years studying music composition with Elinor Armer at the San Francisco Conservatory of Music. During this time she composed more than twenty musical pieces and songs. She has also been studying voice with Deborah Benedict Jackson. A soprano, Vivianne has had two recitals in the San Francisco Bay Area. Devi is committed and dedicated to helping others spiritually, and will continue to raise consciousness and be an instrument of grace. She hopes to offer multi-media recordings of her guided meditation, books, and chants soon. She hopes many more projects and plans will materialize soon.
Loading...
or support indie stores by buying on