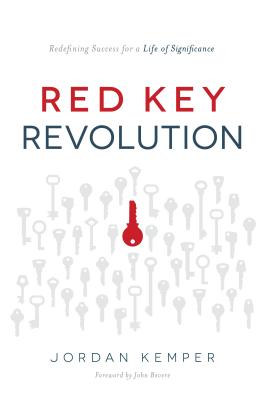 Redefining Success for a Life of Significance

For anyone who has ever stood at a crossroads or been at a pivotal moment in their lives, remember--you can always start over.

​- Have you ever achieved success at something and found it not as fulfilling as you hoped it would be? You're not alone.
- What if our version or definition of success won't bring us the sense of fulfillment we think it will?
- How do you define significance and how do we become significant?

In Red Key Revolution, Jordan Kemper challenges you to reevaluate what it is you're after and why. During his pursuit of success, he found that significance is ultimately what our hearts desire. He unravels his story, including a decision he made as a teenage boy on behalf of a woman he would not meet for almost 20 years--his wife. That decision changed his perspective forever and ultimately led to the fruition of this revolution.

We make decisions every day that will affect the people we meet tomorrow. Through a series of questions and action steps, Red Key Revolution will help you gain clarity on how to deliberately and intentionally pursue significance and success. Sacrifices are necessary for anything worthwhile, and when you sacrifice for what matters most, it's guaranteed to be worth it. Kemper's book redefines success in a way that leaves a legacy--the kind of success that will matter long after you're gone.

After graduating from Wheaton College, Kemper decided to forego medical school to begin his journey of entrepreneurship. His passion for health and wellness led him to build his first company, which now serves more than ten thousand customers. He has traveled the world and appeared on stages before thousands of people with other inspirational experts such as Dr. Oz, Tony Robbins, Sir Richard Branson and John C. Maxwell. Today, Kemper spends much of his time consulting for growing companies. Jordan was a Midwest kid raised in Rockford, Illinois. He and his wife, Kristen, now live in Tampa, Florida and enjoy travel, fishing, food, spending time with friends, and hanging at home with their dog Ella.
or
Not Currently Available for Direct Purchase
Copyright © 2020 American Booksellers Association