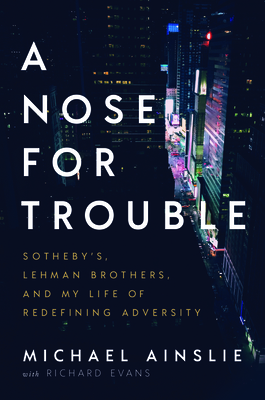 A Nose for Trouble

Sotheby's, Lehman Brothers, and My Life of Redefining Adversity

This is the remarkable memoir of Michael Ainslie, a man who has always embraced the adventures and misadventures of business and life. In A Nose for Trouble, he describes his personal experience with several high profile events, including the 2008 bankruptcy filing of Lehman Brothers: He was one of ten people in the Lehman boardroom on the evening of September 14, 2008 who saw firsthand the events that led to the largest bankruptcy filing in US history. And he offers readers an insider's view of the situations surrounding the price-fixing scandal between Sotheby's and Christie's, a scandal that rocked the art world and sent the ex-chair of Sotheby's to prison.

Ainslie also shares about his early beginnings in life; his career as president, CEO, and board member across numerous companies and institutions; and his work to transform kids' lives through the Posse Foundation. Whether he's being carried out of his high school graduation on a stretcher, escaping a riot in Vietnam, facing death threats in NYC, battling a worldwide oil embargo, meeting with First Lady Nancy Reagan on the day her husband was shot, or revamping the USTA, Ainslie's memoir shows that sometimes, the greatest lessons in life are a direct result of the adversities we face.

A Nose for Trouble is about accepting a challenge, redefining misfortune, and rising above. In this fascinating life story of leadership and change, Michael Ainslie teaches readers that the best parts of ourselves often come out of our hardest moments.

Michael Ainslie is the former president and CEO of Sotheby's, the former president and CEO of the National Trust for Historic Prevention, and a former director of Lehman Brothers. He was also the founding chairman of the Posse Foundation, serving in that role for 13 years and continuing today as an active board member and mentor to scores of Posse scholars and alums. Posse has sent over 9,200 young urban leaders in 10-person cohorts (posses) to elite universities on full-tuition leadership scholarships. 90% of Posse scholars graduate, and they are taking on leadership roles in the workplace.
Loading...
or support indie stores by buying on