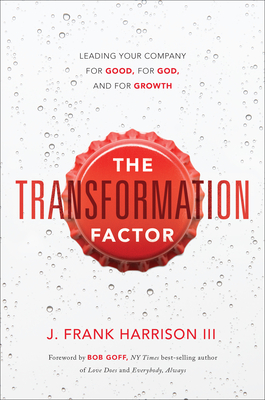 Leading Your Company for Good, for God, and for Growth

​A good leader builds and establishes a company culture people want to be a part of. A transformational leader elevates that, cultivating a culture in which everyone--throughout the organization--is empowered to use their talents to live and work at their best. As the chairman and CEO of Coca-Cola Consolidated, the largest Coca-Cola bottler in the United States, J. Frank Harrison III knows firsthand the importance of not only prioritizing culture but also living out and modeling the values that drive it. He believes every person in an organization matters and how they are led matters just as much. In The Transformation Factor: Leading Your Company for Good, for God, and for Growth, Harrison profiles his company and his own personal journey to show you the radical transformation and amazing ripple effects that come from a purpose-driven, people-focused culture and a leadership style that centers on serving others. With a company that employs over sixteen thousand people, Harrison understands that real culture transformation takes great effort, intention, and courage and also humility and generosity. His book is about teaching leaders how to engage in meaningful work with people, inspire a culture of genuine care, and mobilize everyone around a purpose that not only transcends the everyday work they do but also informs it. Harrison integrates faith with work and demonstrates a revolutionary approach to leadership, modeled after the heart of God. The Transformation Factor shows us what it takes to commit to and invest in people, helping them recognize their fullest potential, and how to transform any environment into a place of vitality, growth, and purpose. With clarity and honesty, Harrison speaks from his experience as a leader to offer us a new way to look at people, culture, business, and success.

J. Frank Harrison III officially began his career with Coca-Cola Consolidated in 1977, but his roots in the Coca-Cola system date back to 1902, when his great-grandfather, J. B. Harrison, first introduced Coca-Cola to the Carolinas. Early in his career Frank worked in a number of entry-level positions, including running routes and operating bottling lines. He graduated from the University of North Carolina with a Bachelor of Science degree in business administration, and in 1983 he obtained an MBA from Duke University. Beginning in 1977, Frank served in a variety of operational and leadership roles throughout the company until becoming chairman and CEO in 1996. As the fourth-generation family leader of what has become the nation's largest Coca-Cola bottler, Frank is focused on creating a culture of servant leaders whose values and actions honor God. Coca-Cola Consolidated is a public company, and Frank is constantly focused on delivering consistent and sustained value to shareholders. At the same time, he believes that God owns it all. He sees himself as the chief steward, accountable to the owner for using the resources he has been entrusted with to make a positive difference in the lives of over sixteen thousand employees and their communities.
Loading...
or support indie stores by buying on