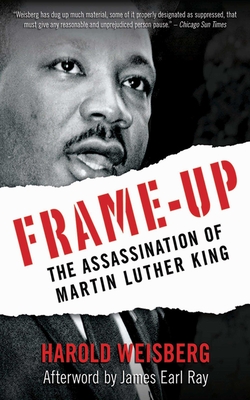 The Assassination of Martin Luther King

Back in print with its original title, Harold Weisberg’s detailed and devastating analysis of the Martin Luther King assassination is as timely as ever. Originally published in 1970, this book examines the circumstances of the murder, accused assassin James Earl Ray’s flight and capture, and the failures of the justice system in this case.

While many books about the King assassination have followed Frame-Up, this work remains unrivaled in its retelling of the circumstances which led Ray to plead guilty in a grossly inadequate “mini trial,” and Ray’s almost immediate failed attempt to retract this confession.

Weisberg also dissects the evidence in the case, and concludes that while Ray was a part of the conspiracy, he did not shoot Dr. King, serving as another “patsy” in the troubling assassinations of the 1960s.

Harold Weisberg is the author of a number of books on the assassination of John F. Kennedy, including the Whitewash series, Oswald in New Orleans, Post Mortem, Never Again!, and Case Open. Weisberg was a journalist, investigator for the Senate Committee on Civil Liberties, and analyst for the Office of Strategic Services in World War II. He died in Maryland in 2002.
Loading...
or
Not Currently Available for Direct Purchase