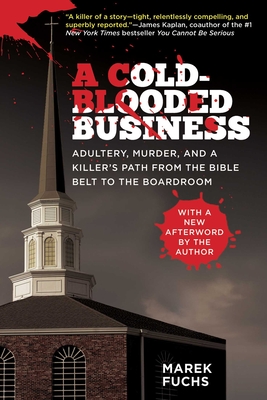 In 1959, Olathe, Kansas, was made famous by the murder of the Clutter family and Truman Capote’s groundbreaking book on the crime, In Cold Blood. But fewer know that Olathe achieved notoriety again in 1982, when a member of Olathe’s growing Evangelical Christian population, a gentle man named David Harmon, was bludgeoned to death while sleeping—the force of the blows crushing his face beyond recognition. Suspicion quickly fell on David’s wife, Melinda, and his best friend, Mark, student body president of the local Bible college. However, the long arms of the church defended the two, and no charges were pressed.

Two decades later, two Olathe policemen revived the cold case making startling revelations that reopened old wounds and chasms within the Olathe community—revelations that rocked not only Olathe, but also the two well-heeled towns in which Melinda and Mark resided. David’s former wife and friend were now living separate, successful, law-abiding lives. Melinda lived in suburban Ohio, a devoted wife and mother of two. Mark had become a Harvard MBA, a high-paid corporate mover, a family man, and a respected community member in a wealthy suburb of New York City. Some twenty years after the brutal murders, each received the dreaded knock of justice on the door. A Cold-Blooded Business provides fascinating character studies of Melinda and Mark, killers who seemingly returned to normalcy after one blood-splattered night of violence. Featuring a new afterword by the author covering the events of the past five years, this fast-moving true crime narrative is a chilling exploration into the darkest depths of the human psyche.