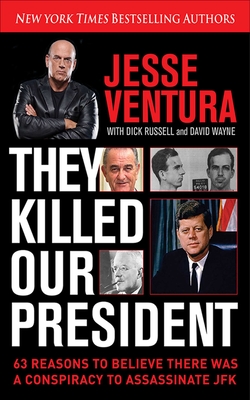 They Killed Our President

63 Reasons to Believe There Was a Conspiracy to As

Unless you’ve been living under a rock for the past fifty years, you’re aware of the many hypotheses that the assassination of President John F. Kennedy was not done by one man. Whether you’ve read one or a dozen of the books on this topic, there’s no way to fully grasp the depth of this conspiracy.

For the first time ever, New York Times bestselling authors Jesse Ventura and Dick Russell have teamed up with some of the most respected and influential assassination researchers to put together the ultimate compendium that covers every angle—from the plot to the murder—of JFK. They Killed Our President will not only discuss the most famous of theories, but will also bring to light new and recently discovered information, which together shows that the United States government not only was behind this egregious plot, but took every step to make sure that the truth would not come out.
With 2013 marking the fiftieth anniversary of JFK’s assassination, this is the perfect time for They Killed Our President to be available to readers. The research and information in this book are unprecedented, and there’s nobody better to bring this to everyone’s attention than the former governor of Minnesota and US Navy SEAL, Jesse Ventura.

Dick Russell has written for such varied publications as Time, Sports Illustrated, and the Village Voice.His books include The Man Who Knew Too Much, Black Genius, and On the Trail of the JFK Assassins. He is also the coauthor of several New York Times bestsellers, including American Conspiracies, 63 Documents the Government Doesn't Want You to Read, and They Killed Our President.

David Wayne is the author of five bestselling books, including Dead Wrong: Straight Facts on the Country's Most Controversial Cover-ups and Hit List: An In-Depth Investigation into the Mysterious Deaths of Witnesses to the JFK Assassination (both written with Richard Belzer). He lives in Honolulu, Hawaii.
Loading...
or
Not Currently Available for Direct Purchase