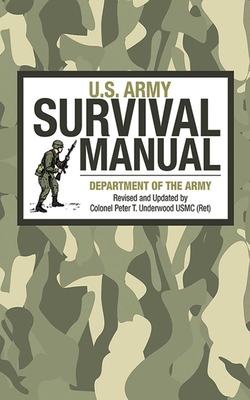 The official US Army manual on how to survive in any dangerous situation—build shelters, make weapons, forage for food, and much more!

Whether you’re gearing up for a backcountry trek, preparing for the worst that nature or man can offer, or just want to prepare by having this great resource at your fingertips, you need this comprehensive, full-color new edition of the U.S. Army Survival Manual, thoroughly revised by Colonel Peter T. Underwood, USMC (Ret.).

Ideal for military personnel, outdoors enthusiasts, preppers, and anyone who wants to be ready for anything, this is a thorough road map for all areas of wilderness survival, including:

From basic first aid to in-depth, step-by-step instructions on overcoming major obstacles and handling emergencies, this guide clarifies all aspects of survival using tactics derived from those whose lives depend on it.