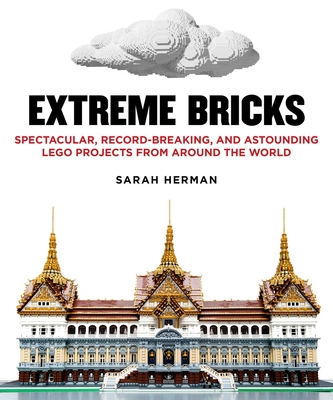 Spectacular, Record-Breaking, and Astounding LEGO Projects from around the World

From the Great Pyramid of Giza and Stonehenge to the Colosseum and the Taj Mahal, man has never shied away from an extreme building challenge, and the LEGO builders of the twenty-first century are no different. Whether they’re re-creating the works of ancient masters in brick form, building life-size superheroes, breaking world records with skyscraping towers, or firmly adjusting their thinking caps to program plastic robots, some LEGO fans are taking their passion for plastic to the extreme.

Sarah Herman, the author of A Million Little Bricks: The Unofficial Illustrated History of the LEGO Phenomenon, has brought together some of the world’s most ambitious builders in a fact-filled showcase of truly mind-blowing models for this exciting illustrated book. Extreme Bricks chronicles the first attempts at large-scale models embarked on by the LEGO Group as well as the early work of LEGOLAND artists and builders and contemporary LEGO Certified Professionals who build big for a living. It charts the rise of AFOLS (adult fans of LEGO) and their increasingly spectacular models and gargantuan collections. Packed with two hundred color photographs to shock and surprise, the book also explores the popular building competitions and includes a closer look at the shockingly smart LEGO MINDSTORMS robots that can do everything from solving a Rubik’s Cube to building their own LEGO models.

Sarah Herman is a British writer and editor. She has written for Total Film, Star Wars Insider, and the official magazines for Lost, Grey's Anatomy, and CSI. She has edited a number of other publications, including The Ingenue, The Lab Magazine, and Get Fresh!, and is the author of three books about LEGO, The Classic Guide to Famous Assassinations, and the bestselling Does Anything Eat S**t? She resides in the fine city of Norwich, England.
Loading...
or
Not Currently Available for Direct Purchase