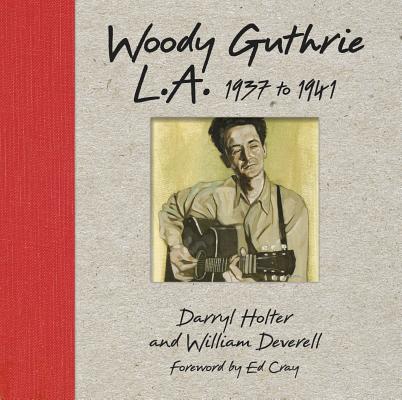 We know Woody Guthrie as the role model for Bob Dylan and Bruce Springsteen, as the bard of Greenwich Village, and of course as the scribe of America's other national anthem "This Land is Your Land." As we learn in the pages of Woody Guthrie L.A.: 1937 to 1941, Woody Guthrie became the Woody we know when he made his way west from Oklahoma to Los Angeles. He met America's people. He saw the land that was his land, your land, my land. His eyes opened, his message sharpened, and his words were already on their way to iconic.

Twelve essays tell the story in Woody Guthrie L.A. 1937 to 1941. Celebrated Guthrie experts cover Guthrie's racial egalitarianism as he threw off the worst of his Oklahoma and Texas roots and pushed past a notorious lynching in which his father may have participated, his ability to mold evangelical perspectives into politically savvy folk songs, and the impact he still exerts in his songs about migrants and workers looking for the main chance in California.

Woody Guthrie L.A.: 1937 to 1941, edited by historians Darryl Holter and William Deverell, is the product of many years' research and close cooperation with members of Woody Guthrie's family and estate. Lyrics Guthrie wrote about Los Angeles, many of which he never set to music, are published in this remarkable volume for the first time. The book also features more than a dozen of Guthrie's brilliant cartoons--his quickly drawn satires on politics, the wealthy, and the future of Los Angeles. That he was prescient becomes clear. And his genius for communication, the essence of his place in the annals of American music history, is apparent on every page.

Darryl Holter is the author of Workers and Unions in Wisconsin: A Labor History and The Battle for Coal: Miners and the Nationalization of Coal-Mining in France. He is a musician and singer-songwriter, a former labor leader, an urban developer, an adjunct professor of history at the University of Southern California, and a member of the Professional Musicians Union Local 47.

William Deverell is professor of history and director of the Huntington-USC Institute on California and the West at the University of Southern California. He is the author of numerous studies of the nineteenth- and twentieth-century American West, including Whitewashed Adobe: The Rise of Los Angeles and the Remaking of Its Mexican Past.