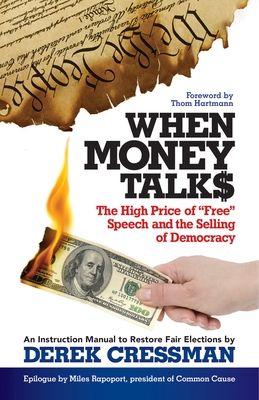 The High Price of Free Speech and the Selling of Democracy

Special-interest money is destroying our democratic process. But now that the Citizens United decision has thrown out campaign spending limits as abridgments of free speech, Americans want to know what they can do about it. Derek Cressman gives us the tools, both intellectual and tactical, to fight back.

There’s nothing inherently unconstitutional in limiting the amount of speech, Cressman insists. We do it all the time—for example, cities control when and where demonstrations can take place or how long people can speak at council meetings. Moreover, he argues that while you choose to patronize Fox News, MSNBC, the New York Times, or the Wall Street Journal, political advertising is forced upon you. It’s not really free speech at all—it’s paid speech. It’s not at all what the Founders had in mind when they wrote the First Amendment.

Cressman examines how courts have foiled attempts to limit campaign spending, details what a constitutional amendment limiting paid speech should say, and reveals an overlooked political tool concerned citizens can use to help gain the amendment’s passage. Seven times before in our history we have approved constitutional amendments to overturn wrongheaded rulings by the Supreme Court—there’s no reason we can’t do it again.

Praise For When Money Talks: The High Price of Free Speech and the Selling of Democracy…

“When money talks, democracy walks. Read this book to learn how We the People can take back our elections from the billionaires and overturn a Supreme Court ruling that is a gross misreading of our Constitution.”
—Robert B. Reich, Chancellor’s Professor, University of California, Berkeley, and former US Secretary of Labor

“Derek Cressman nails it: money isn’t speech; it’s power. After the Supreme Court’s folly in Citizens United, concentrated money and power is destroying our democracy. But we can save it with a twenty-eighth amendment to the Constitution, and this book shows all of us how. Read it and join this historic work of all Americans.”
—Jeff Clements, author of Corporations Are Not People

“Derek Cressman has explored the great issues of money in politics from every perspective: as a scholarly observer, as a passionate activist, as a serious candidate. And he has drawn from his years of struggle on behalf of nothing less than democracy itself an essential insight: ‘If money is speech, then speech is no longer free.’ Cressman’s brilliant examination of all the questions, all the ideas, all the issues that extend from that statement provides an essential starting point for every discussion of how to fix our broken electoral and governing systems. When Money Talks is much more than a book—although it is a very fine book. It is the key we have been looking for to unlock a future where the will of the people again triumphs over the money power.”
—John Nichols, Washington correspondent, The Nation

“Cressman’s book is a powerful indictment of Citizens United and provides thoughtful ideas on how We the People can help restore our democracy.”
—Lisa Graves, Executive Director, Center for Media and Democracy, and publisher, PRWatch.org and ALECexposed.org

“Already, sixteen states and some 650 localities have called on Congress to send the states a constitutional amendment overturning Citizens United. In two states, Colorado and Montana, voters sent the message directly, through ballot measures that Derek Cressman helped lead when he was a vice president at Common Cause. We can thank Derek for his early, strategic thinking and organizing that built momentum for a constitutional amendment as the people’s solution to the problem.”
—From the epilogue by Miles Rapoport, President, Common Cause

“When the story is written about how Americans came together to overturn Citizens United and end billionaire rule, Derek Cressman will have his own chapter. His passion for democracy is exceeded only by his clarity and his insights. When Money Talks is a map to the twenty-eighth amendment goal line.”
—Michele Sutter, cofounder, Money Out Voters In Coalition

“For more than twenty years, Derek Cressman has been at the vanguard calling for a constitutional amendment to end the big-money dominance of our elections. When Money Talks powerfully makes the case why our current system of unlimited campaign spending is a threat to our republic and how we can advance and win a twenty-eighth amendment to ensure that all voices can be heard in the political process on a level playing field. Derek Cressman is a visionary for our democracy, and this is a must-read book for all Americans, across the political spectrum, who want to take the country back from the oligarchs and reclaim it for We the People.”
—John Bonifaz, cofounder and President, Free Speech for People

Derek Cressman has worked professionally to strengthen campaign finance laws since 1995 as director of U.S. PIRG’s Democracy Program and a national vice president with Common Cause. He ran for California secretary of state in June 2014. www.derekcressman.com


Thom Hartmann is a nationally and internationally syndicated talkshow host whose radio and TV shows are available in over a billion homes nationwide. He is the author of 24 books, most recently the bestselling The Crash of 2016.
Loading...
or
Not Currently Available for Direct Purchase