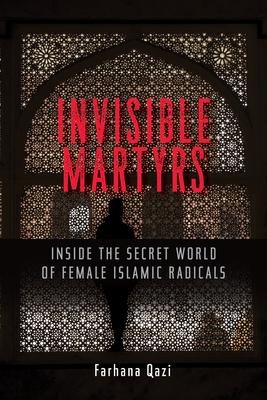 Inside the Secret World of Female Islamic Radicals

The first Muslim woman to work for the U.S. government's Counterterrorism Center, Qazi found herself fascinated, even obsessed, by the phenomena of female extremists. Why, she wondered, would a girl from Denver join ISIS, a radical movement known for its mistreatment of women? Why would a teenage Iraqi girl strap on a suicide bomb and detonate it?

From Kashmir to Iraq to Afghanistan to Colorado to London she discovered women of different backgrounds, who all had their own reason for joining these movements. Some were confused, others taken advantage of, and some were just as radical and dedicated as their male counterparts. But in each case, Qazi found their choices were driven by a complex interaction of culture, context, and capability that was unique to each woman.

This book reframes their stories so readers can see these girls and women as they truly are: females exploited by men. Through hearing their voices and sharing their journeys Qazi gained powerful insights not only into what motivated these women but also into the most effective ways to combat terrorism--and about herself as well. "Through them," Qazi writes, "I discovered intervention strategies that are slowly helping women hold on to faith as they struggle with versions of orthodox Islam polluted by extremist interpretations. And in the process, I discovered a gentle Islam and more about myself as a woman of faith."

Farhana Qazi is a gender expert instructor at the Elliott School of International Affairs, George Washington University, and a research fellow at the Center for Global Policy. She received the 21st Century Leader Award from the National Committee on American Foreign Policy in New York and the Humanitarian Award from her alma mater in Texas.

Praise For Invisible Martyrs: Inside the Secret World of Female Islamic Radicals…

"This is an extraordinary book, written by an extraordinary woman. Qazi is a master storyteller, capturing the emotion as well as the subtleties of what she wants to communicate. And as the first Islamic member of the U.S. Counterterrorism Center, there is a lot that she wants to tell readers about. She knew Islam to be a religion of peace and compassion. The personal horror of terrorism for her was coming face to face with female psychopaths who shared that faith. She’s devoted her career to trying to understand that phenomenon and finding a way to explain it to non-Muslims in a way that is productive. The dreary cover of this book captures the dark world that Qazi immersed herself in, but it belies the light that she brings into the world by trying to put a human face on extreme female violence. She has become her mother’s prayer: Be constantly occupied with listening to God. Believe that He has a purpose for you."
—Anna Jedrziewski, Retailing Insight

“Qazi, a former analyst at the U.S. National Counterterrorism Center and a Muslim, investigates what leads women to become radical Islamists in this volume, part analysis and part searching memoir.…this is a heartfelt plea for the tolerant majority to take back their religion from the violent fringe.”
—Publishers Weekly

“This is a conceptually innovative and highly-informed account of the appeal of violent extremism to the tiny minority of Muslim women who leave their homes, especially in Western countries, to join foreign terrorist groups, such as the Islamic State (IS).”
—Joshua Sinai, Perspectives on Terrorism

“Farhana Qazi takes the reader on a well-written and analytically sharp tour of the world of women who kill in the name of God.”
—Peter Bergen, Vice President of New America Foundation and CNN's national security analyst

“Farhana Qazi continues to serve as an ambassador between religions and cultures in difficult and violent times. Her book is a must-read to separate the peaceful practice of Islam from violent extremism.”
—Ambassador Akbar Ahmed, Ibn Khaldun Chair of Islamic Studies, American University

“Qazi is a daring researcher who provides answers to why women and girls join extremism. With an open heart, she weaves in her own personal story to tell the world that ignorance of faith disempowers Muslim females. This is the only book by an American Muslim woman with a counterterrorism background that has the power to change hearts and minds.”
—Judit Maull, Producer, Happy Madison Productions

“Farhana Qazi’s new book, Invisible Martyrs, is an authentic revelation of how Islam can be skewed by some, thus distorting the core fundamental goodness of the faith of Islam, and especially for gender issues. In this complex and volatile world, women reject terrorism and conflict—they search for peace, justice, and rights. Bravo to Farhana with this most important message in her new book.”
—Lois A. Herman, Coordinator, Women’s UN Report Network

Distorting the teachings of religion is not unique to extreme Islam in our time. We find it everywhere, and we all need to address it if we are to mend our world which is undergoing a deep moral crisis. This book focuses on women who are recruited by radical organizations who distort the teaching of Islam. I share the author’s conclusion that, as we have always seen in the past, those who have no regard for human life cannot succeed. The teachings of compassion and justice shared by all the major faiths will continue to prevail."
—Rabbi Mordecai Schreiber

“Farhana Qazi focuses on the importance of going local as the foundation for countering and preventing violent extremism, understanding that Muslims are the front line in the global war on terrorism.”
—Stephen M. Apatow, President, Humanitarian Resource Institute

“Farhana Qazi highlights the precious gift of Islam in this book, which is to bring the misguided female extremist closer to the truth and understand a religion of love and mercy.”
—Jennifer Sue Parker, senior commander, US military

“Informed by her own experience and personal encounters, Qazi’s book takes us inside the mindset of those who, contrary to their own religious beliefs and to society’s perceptions of women as nurturers, instead become its murderous fanatics. While avoiding the alarmist prose and political agendas that color so much of the literature on terrorism, Invisible Martyrs offers a fascinating and harrowing story. Of all the recent books on this topic, this one is an essential read.”
—Brian Michael Jenkins, Senior Adviser, RAND Corporation

“Qazi has given us a deeply personal yet acutely analytical journey into the minds of the women and girls who seek out violent extremism. Invisible Martyrs is an electrifying page-turner that should be read by everyone who wants to understand this disturbing phenomenon.”
—John Horgan, senior counterterrorism adviser to the United States and Professor, Georgia State University

“Qazi gives us a book that is bold, brave, and brilliant. A must-read for everyone trying to unpack violent extremism from a peaceful religion.”
—Amanda Ohlke, Adult Education Director, International Spy Museum

“Invisible Martyrs reflects Qazi’s personal spiritual journey as a Muslim American woman, mother, immigrant, and scholar trying to understand motives for terrorism that are so alien to her experiences with Islam. An antidote to complaints in the media that Muslims aren’t speaking up, the book demonstrates that many Muslim scholars continue to be doing their part to combat what the author characterizes as a ‘disturbing trend of an uncompromising Islamic scholarship spreading in the Muslim and Western world.’ Qazi also suggests alternative narratives against extremism, in which struggling ‘in the way of God’ means taking the path to love, not to war.”
—Barbara Sude, former senior counterterrorism analyst, US government

“Through storytelling, Qazi takes a deeper look at what motivates women and girls to join a dangerous and radical movement. This book is essential for anyone hoping to understand the dark truth of violent extremism as well as the beauty of Islam.”
—Angelina Maldonado, world affairs instructor

“Farhana Qazi has utilized a lifetime of studying Islam to craft a book that sheds light on a great mystery. She comes at the subject as a scholar and an American woman who spent time with Muslim women to understand their motivations. Her insights are unique. She draws on a tremendous amount of research and reflection. It is a valuable read to help understand what Islam really says and how we might prevent future violence.”
—Vicky Collins, television producer and journalist

“Compellingly written and hard to put down, Farhana Qazi’s first-person perspective asks difficult questions about faith and culture while shining a light on an often-unexpected and unseen side of radical Islam.”
—Eric Tipton, author and screenwriter

“With Invisible Martyrs, Farhana Qazi turns conventional thinking upside down and forces us to ask new questions about who engages in political violence and why. A highly original, compelling, and very readable exploration of a side of terrorism we know very little about.”
—Peter Mandaville, Professor of International Affairs and Islamic Studies, George Mason University, and former Senior Adviser to Secretaries of State Hillary Clinton and John Kerry

“In her book, Qazi fights violent extremists by trying to capture the true spirit of Islamic teachings while also understanding and offering solutions to vulnerable Muslims who need to reject such messages and once again embrace a religion of peace.”
—Anne Speckhard, Director, International Center for the Study of Violent Extremism, and Adjunct Associate Professor of Psychiatry, Georgetown University School of Medicine

“Farhana Qazi tells the fascinating inside story of the women who are ready to die for radical Islam.”
—Deborah Scroggins, author of Wanted Women

“Heartbreaking. The balance Qazi brings to a difficult story—extremism versus the teachings of peace and love—makes for a powerful read. Telling the story through the eyes of women makes it memorable.”
—Betsy Ashton, author and former President, Virginia Writers Club

“With her inimitable insights, compelling analysis, and clear-eyed stories, Farhana Qazi makes a world opaque to most all of us accessible and vivid. This book has much for those willing to be taught and should be read widely.”
—Eric Selbin, Chair of International Studies, Professor of Political Science, and Lucy King Brown Chair, Southwestern University

“Farhana Qazi’s courage and compassion inform this extraordinary book, which gives new and important insights into the radicalization of violent extremists. A beautifully-crafted cri-de-coeur, Invisible Martyrs stands as crucial reading for all who share the author’s dedication to freedom, security, human rights, and human dignity.”
—Abigail R. Esman, award-winning journalist, author, and member of Scholars for Peace in the Middle East
or
Not Currently Available for Direct Purchase
Copyright © 2020 American Booksellers Association