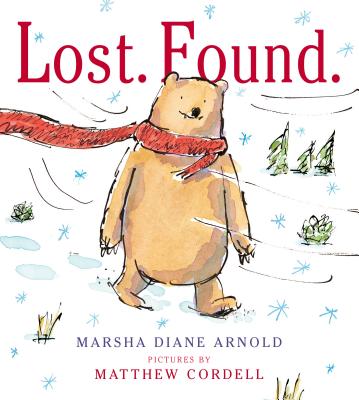 On a wintry day, a bear loses his soft red scarf. The wind carries it *whoosh* to a pair of raccoons who use it to play tug-o-war. When they run off, a beaver dons the scarf as the perfect winter hat...until it gets tangled on a tree branch. The scarf is lost and found by a series of animals, including a fox and a couple of rascally squirrels, who use it as everything from a swing to a trampoline.

When all the animals lay claim to the scarf at once, calamity ensues that can only be fixed by a bear, a little patience, and friendship, in this nearly wordless, clever picture book.

“The way the animals make things right with the scarf's original owner adds sweetness to the mix, but it's the giggly impulsiveness of the forest's wildlife that provides the entertainment-the effect is half nature documentary, half Marx Brothers.” —Publishers Weekly, starred review

"The attention to detail and the expressions displayed on the animals’ faces are superb. A fun addition to any picture book collection."—School Library Journal, starred review

Lost. Found. is Marsha Diane Arnold's twelfth book. Her picture books have garnered awards from Best First Book by a New Author to Smithsonian Notable to Dolly Parton's Imagination Library. She's tried her hand at all the activities in Lost. Found. - from walking in the snow to jumping on a trampoline to knitting things back together again. And she has always believed that if you lose something, it is never truly lost.

Matthew Cordell is the author and illustrator of Caldecott award winner Wolf in the Snow, Trouble Gum, Another Brother, hello! hello!, and Wish. He has illustrated the books of renowned authors including Philip Stead (Special Delivery), Rachel Vail (the Justin Case series), and Gail Carson Levine (Forgive Me, I Meant To Do It). He lives outside of Chicago with his wife, the novelist Julie Halpern, and their two children.
Loading...
or
Not Currently Available for Direct Purchase