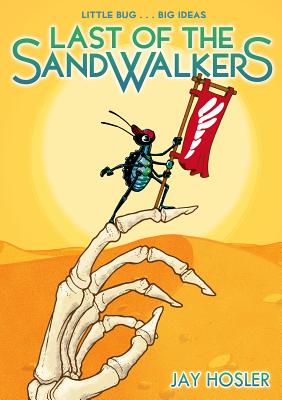 Nestled in the grass under the big palm tree by the edge of the desert there is an entire civilization--a civilization of beetles. In this bug's paradise, beetles write books, run restaurants, and even do scientific research. But not too much scientific research is allowed by the powerful elders, who guard a terrible secret about the world outside the shadow of the palm tree.

Lucy is not one to quietly cooperate, however. This tiny field scientist defies the law of her safe but authoritarian home and leads a team of researchers out into the desert. Their mission is to discover something about the greater world...but what lies in wait for them is going to change everything Lucy thought she knew.

Beetles are not the only living creatures in the world.

Deftly combining suspenseful adventure storytelling with the principles and tools of scientific inquiry, entomologist and cartoonist Jay Hosler has created in Last of the Sandwalkers a tale that satisfies and fascinates even the most bug-averse among us.


Praise For Last of the Sandwalkers…

"Hosler, a biologist, packs this graphic novel with facts about bugs, but the action hurtles forward." —New York Times

"A tale of a new age of exploration--a story of discovery, betrayal, and revelation. Did I mention it's about bugs? Another excellent story from Jay Hosler." —Stan Sakai, author of Usagi Yojimbo

"It’s a beautiful blend of adventure and science-fiction, abundant in humor (“BOOGA BOOGA!”), and with plenty of twists and turns keeps you on the edge of your seat until the very end....Last of the Sandwalkers has been one of the most enjoyable reads in recent memory." —Bleeding Cool

"Hosler’s cartooning is no less meticulous than his writing and similarly retains a sense of animated energy and humor, engaging readers with characters that are far from human, but filled with humanity." —Booklist

"Perfect for the bug-loving reader, this is also book to grow into, with layers of science learning opportunities (including a handful of potshots at creationism) that broaden appeal and encourage multiple readings." —The Bulletin of the Center for Children's Books

"A journey of discovery for a family of scientist-beetles becomes a journey of survival in Hosler’s entomological adventure, an intriguing look at life from only a few millimeters off the ground." —Publishers Weekly

"Entomologist Hosler offers an epic adventure that delivers an astonishing amount of information in its interstices . . . the clarity of its theme and appeal of its characters carry the day." —Kirkus Reviews

Jay Hosler is a biology professor at Juniata College, and a cartoonist. He enjoys telling stories about science and the natural world, and his first graphic novel (Clan Apis) won a Xeric Award and was selected for YALSA's "2002 Popular Paperbacks for Young Adults." His book Evolution: The Story of Life on Earth, was a 2011 Junior Library Guild selection, a nominee for YALSA's 2012 "Great Graphic Novels for Teens," and has been included in the Texas Library Association's "Maverick Graphic Novel Reading List." He lives in central Pennsylvania with his wife and his two little nerdlings.
Loading...
or
Not Currently Available for Direct Purchase