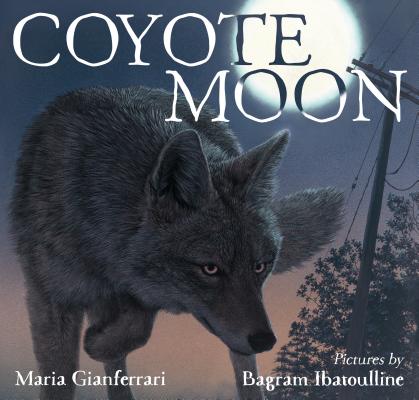 A howl in the night.

A watchful eye in the darkness.

A flutter of movement among the trees.

In the dark of the night, a mother coyote stalks prey to feed her hungry pups. Her hunt takes her through a suburban town, where she encounters a mouse, a rabbit, a flock of angry geese, and finally an unsuspecting turkey on the library lawn.

3 starred reviews
An ALA Notable Book

"“Yip-yip-yip-yip!” indeed, for this sympathetic portrayal of a not-often-celebrated creature who shares our world."—Kirkus Reviews, starred review

Maria Gianferrari was inspired to write Coyote Moon after her first coywolf sighting on a moonlit night in her own Massachusetts backyard. Maria now lives in northern Virginia with her scientist husband, artist daughter, and rescue pets, Becca the dog and Lucia the rat. Hello Goodbye Dog is her first book for Roaring Brook Press.

Bagram Ibatoulline is a Russian-born artist who has illustrated many acclaimed books for young readers, including Kate DiCamillo's The Miraculous Journey of Edward Tulane, Jane Yolen's The Scarecrow's Dance, and Lois Lowry's Crow Call. He lives in the Catskills region of New York.
or support indie stores by buying on