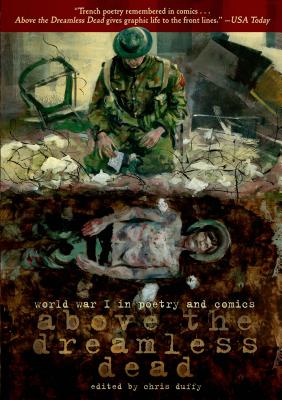 Above the Dreamless Dead

World War I in Poetry and Comics

As the Great War dragged on and its catastrophic death toll mounted, a new artistic movement found its feet in the United Kingdom. The Trench Poets, as they came to be called, were soldier-poets dispatching their verse from the front lines. Known for its rejection of war as a romantic or noble enterprise, and its plainspoken condemnation of the senseless bloodshed of war, Trench Poetry soon became one of the most significant literary moments of its decade.

The marriage of poetry and comics is a deeply fruitful combination, as evidenced by this collection. In stark black and white, the words of the Trench Poets find dramatic expression and reinterpretation through the minds and pens of some of the greatest cartoonists working today.

With New York Times bestselling editor Chris Duffy (Nursery Rhyme Comics, Fairy Tale Comics) at the helm, Above the Dreamless Dead is a moving and illuminating tribute to those who fought and died in World War I. Twenty poems are interpreted in comics form by twenty of today's leading cartoonists, including Eddie Campbell, Kevin Huizenga, George Pratt, and many others.

Chris Duffy has written many comic books, for Marvel and DC Comics, and has edited comics and graphic novels for Nickelodeon Magazine, United Plankton Pictures, DC Comics, and First Second, where he edited the New York Times bestseller Fairy Tale Comics. He currently is a senior editor at Workman Publishing, and lives in Cold Spring, New York, where he has seen a number of horses, but hasn't managed to ride one yet.
Loading...
or
Not Currently Available for Direct Purchase