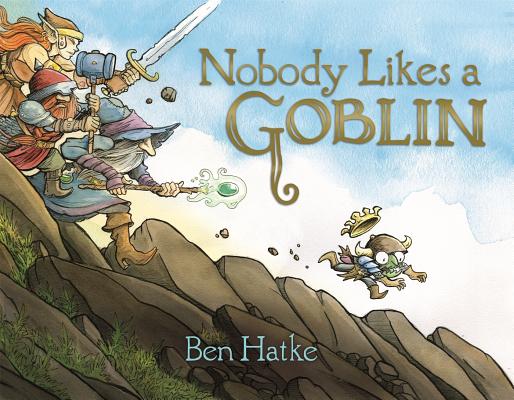 Nobody Likes a Goblin

Goblin, a cheerful little homebody, lives in a cosy, rat-infested dungeon, with his only friend, Skeleton. Every day, Goblin and Skeleton play with the treasure in their dungeon. But one day, a gang of "heroic" adventurers bursts in. These marauders trash the place, steal all the treasure, and make off with Skeleton—leaving Goblin all alone!

It's up to Goblin to save the day. But first he's going to have to leave the dungeon and find out how the rest of the world feels about goblins.


Praise For Nobody Likes a Goblin…

"Hatke (Little Robot) renders the characters’ antic facial expressions, their fairy tale costumes, and the fantasy landscape with polished skill, and his story gallops along cheerfully with the clear prospect of a happy ending." —Publishers Weekly, starred review

"Young readers will find themselves cheering Goblin on—he may not be lovely, but his sense of friendship and his loyalty are convincing and appealing.Endearing and entertaining: what's not to like—or love?" —Kirus Reviews, starred review

"Hatke’s got an impressive gift for capturing the forlorn with little to no words, as in his recent gem of a graphic novel, Little Robot, and he does so again here, as brief, simple descriptive sentences are paired with quiet but powerful visual representations of Goblin’s heartbreak and fear." —The Bulletin of the Center for Children's Books, starred review

"Perfect for kids who want a magical tale or spooky story with a twist." —School Library Journal

"Preschoolers will delight at the twists and turns of this friendship story and its happily-ever-after finish." —Booklist