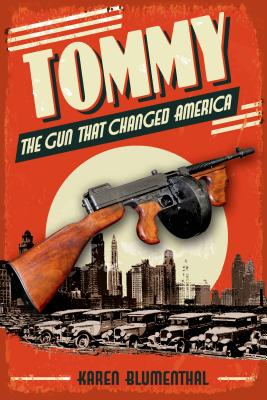 The Gun That Changed America

John Taliaferro Thompson had a mission: to develop a lightweight, fast-firing weapon that would help Americans win on the battlefield. His Thompson submachine gun could deliver a hundred bullets in a matter of seconds—but didn't find a market in the U.S. military. Instead, the Tommy gun became the weapon of choice for a generation of bootleggers and bank-robbing outlaws, and became a deadly American icon. Following a bloody decade—and eighty years before the mass shootings of our own time—Congress moved to take this weapon off the streets, igniting a national debate about gun control. Critically-acclaimed author Karen Blumenthal tells the fascinating story of this famous and deadly weapon—of the lives it changed, the debate it sparked, and the unprecedented response it inspired.


Praise For Tommy: The Gun That Changed America…

“In this biography of a gun and the times in which it lived, Blumenthal traces the Thompson submachine gun, a.k.a. the Tommy. . . With thorough research and impeccable documentation, [Blumenthal] shows the complexity of gun culture, leaving more questions than answers concerning contemporary use and misuse of firearms and the future of Second Amendment battles.” —Horn Book

“A great story well told.” —The Bulletin of the Center for Children’s Books