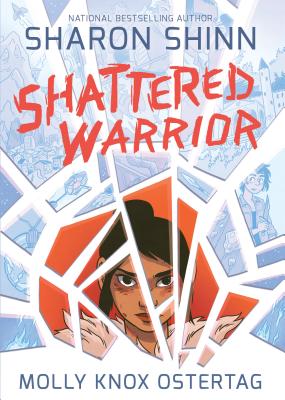 It is eight years after Colleen Cavanaugh's home world was invaded by the Derichets, a tyrannical alien race bent on exploiting the planet's mineral resources.

Most of her family died in the war, and she now lives alone in the city. Aside from her acquaintances at the factory where she toils for the Derichets, Colleen makes a single friend in Jann, a member of the violent group of rebels known as the Chromatti. One day Colleen receives shocking news: her niece Lucy is alive and in need of her help. Together, Colleen, Jann, and Lucy create their own tenuous family.

But Colleen must decide if it's worth risking all of their survival to join a growing underground revolution against the Derichets ... in Sharon Shinn and Molly Knox Ostertag's Shattered Warrior.

"The plot may be familiar, but the social customs of each group are defined so precisely that every detail feels strange and surprising." —Kirkus

"This is a strong choice for sci-fi graphic novel collections, especially those seeking representation in genre fiction." —School Library Journal

"This title has crossover appeal for dystopian buffs, sci-fi fans, for those who simply like the format, and for romance readers as well, since the love between Colleen and the man who finally thawed her frozen heart is gripping stuff." —Bulletin of the Center for Children's Books

"Perfect for fans of dystopian sci-fi and books with strong female leads." —Booklist

Sharon Shinn has published more than twenty-five novels, one collection, and assorted pieces of short fiction since her first book came out in 1995. Among her books are the Twelve Houses series (Mystic and Rider and its sequels), the Samaria series (Archangel and its sequels), the Shifting Circle series, and the Elemental Blessings series. She lives in St. Louis, loves the Cardinals, watches as many movies as she possibly can, and still mourns the cancellation of “Firefly.”

Molly Knox Ostertag grew up in the forests of upstate New York and read far too many fantasy books as a child. She studied cartooning at the School of Visual Arts in New York City and now lives in Los Angeles, where she enjoys the beach year-round but misses good bagels. While at school she started drawing the award-winning webcomic Strong Female Protagonist, which continues to update and be published through Kickstarter and Top Shelf Comics. She draws comics about tough girls, sensitive boys, history, magic, kissing, superpowers, and feelings.
Loading...
or
Not Currently Available for Direct Purchase