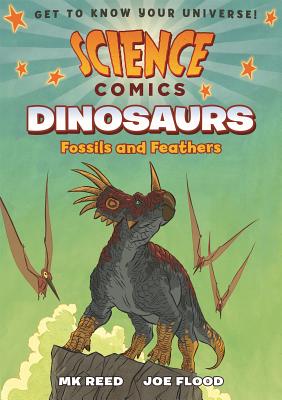 Every volume of Science Comics offers a complete introduction to a particular topic--dinosaurs, coral reefs, the solar system, volcanoes, bats, flying machines, and more. These gorgeously illustrated graphic novels offer wildly entertaining views of their subjects. Whether you're a fourth grader doing a natural science unit at school or a thirty-year-old with a secret passion for airplanes, these books are for you!

This volume: in Dinosaurs, learn all about the history of paleontology! This fascinating look at dinosaur science covers the last 150 years of dinosaur hunting, and illuminates how our ideas about dinosaurs have changed--and continue to change.

Joe Flood is a comic book artist whose work includes The Cute Girl Network (with Greg Means and MK Reed), the Pirates of the Caribbean series (with Chris Schweizer) and Dinosaurs: Fossils and Feathers (with MK Reed) from First Second’s Science Comics series. He lives in New York’s Hudson Valley with his wife and daughter.

"The artwork and text are attractive and interesting, and readers will learn how dinosaur bones became fossils and how their remains were eventually discovered. Great entry-level texts that will spark readers’ interest in these topics." —School Library Journal