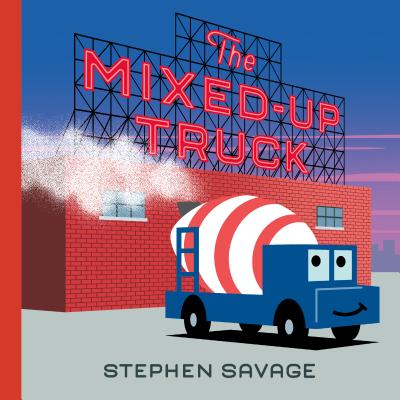 It's Cement Mixer's first day on the job and he doesn't want to make any mistakes. How can he help the other trucks on the construction site? By mixing some powdery white cement, of course!

He mixes it up, adds a little water, and presto . . . a cake?! He must have mixed flour instead of cement.

Not to worry, he'll try again . . . and presto! Frosting?! He'll keep trying until he gets it just right and it's time for one more mixing: a bubble bath!


Praise For The Mixed-Up Truck…

"Savage (Supertruck) creates a sunny cast of vehicular characters, and his brief text is equally upbeat, punctuated by fun repetition (“presto!” is also used ironically to herald the cement mixer’s mishaps), and a play on words involving mix-up and mixed up." Publishers Weekly, starred

"The book's thematic elements—trucks and food and mastery of a skill—are well-pitched to a very young audience."—Kirkus Reviews

"This tale’s tight plot and winsome characters serve the dual purpose of exploring the world of vehicles and emphasizing the rewards of perseverance. A surefire storytime selection."—School Library Journal

"An imaginative picture book for young truck fans to enjoy."—Booklist

Stephen Savage is the illustrator of the New York Times bestselling picture book Polar Bear Night, also named a New York Times Best Illustrated children's book. He is also the creator of Where's Walrus?, which was the recipient of three starred reviews. He lives in Brooklyn with his wife and daughter.
Loading...
or support indie stores by buying on