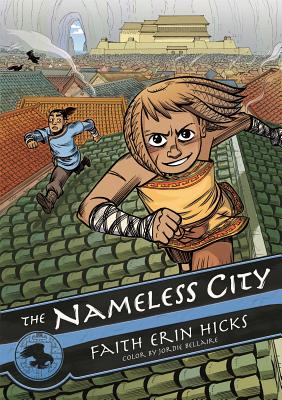 
Praise For The Nameless City…

"The artwork is breathtaking...lending each panel a richness that appropriately reflects a multifaceted culture." —New York Times

"Faith Erin Hicks breathes life into her characters with gale-force winds. The Nameless City makes you feel everything its heroes are experiencing inside and out, from adolescent angst to the scrape of terra cotta tiles under a leaping boot." —Bryan Konietzko, co-creator of Avatar: The Last Airbender

"Faith Erin Hicks is one of the best creators working in graphic novels today and The Nameless City is a fantastic introduction to an exciting new series. Looking forward to reading more!" —Kazu Kibuishi, author of the Amulet series

"This tale of unexpected alliances has everything: winning characters, a sumptuous setting, and sharp observations about power and history. Hidden depths abound in The Nameless City." —Scott Westerfeld, author of Uglies andZeroes

"The beauty and construction of the Nameless City will leave you breathless. Faith has created a world so detailed and believable, it makes me want to explore the back alleys to see what is there." —Jeff Smith, author of the Bone series

"Hicks’s sequential artwork is polished, and though males hold nearly all the political power, the female characters are mighty warriors the men respect (and sometimes fear)." —Publishers Weekly, starred review

"Offer this winning graphic novel to fans of Fullmetal Alchemist and Avatar: The Last Airbender, who will appreciate its mix of fun and adventure and its exploration of questions of identity, belonging, and history. A superb beginning." —Kirkus Reviews, starred review

" With comprehensive worldbuilding, well-rounded characters, and entertaining action, this expertly executed story will find a home with a wide variety of readers." —Booklist, starred review

"Historical fiction fans will likely find this a gripping narrative about how people adapt to, quietly fight against, but mostly just endure lives under the control of others." —The Bulletin of the Center for Children's Books