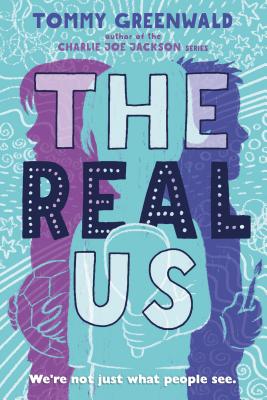 Laura Corbett and Damian White are loners, and not by choice. Kids make fun of smart, sarcastic Laura for her weight and artistic Damian for his tendency to sweat through his shirts. Calista Getz, however—well, everyone agrees that Calista is the prettiest girl in the whole school. Maybe even the whole state. Let’s just say that she sits at the popular lunch table. Laura and Damian don’t.

But when Calista wakes up just before the school dance with the BIGGEST pimple she has EVER seen right in the middle of her face, and her attempts to hide it backfire spectacularly, Laura and Damian are the only ones who don't ignore her. In fact, they seem to see not only past her pimple, but past her popularity, too. Together, they'll challenge the school's status quo in this hilarious, heartfelt novel The Real Us, by Tommy Greenwald.

JP Coovert lives in Cincinnati, Ohio where he uses his time making as much rad artwork as possible. On the side, he co-runs a record and comic label called One Percent Press. He's written and drawn almost 50 comics, including his ongoing series, Simple Routines. JP Wants to create cool stuff forever, like illustrating every animal on the planet, creating a library full of kids books, and painting a mural on the moon!
Loading...
or
Not Currently Available for Direct Purchase