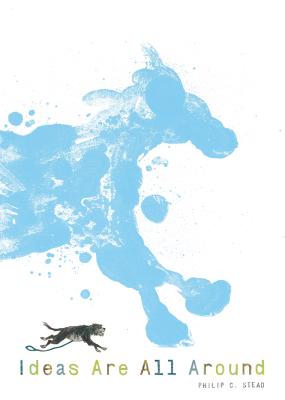 Ideas Are All Around (Hardcover)

As an author and his dog, Wednesday, walk through their neighborhood, they look at sunflowers, say hi to Frank, a turtle, who makes quick for the water and disappears, and watch a train rumble by as they walk uphill to a big purple house that belongs to their friend Barbara. Wednesday chases squirrels while the two friends discuss fishing and war and how back before the neighborhood was there enormous woolly mammoths roamed where houses now sit.

Thoughts open up to other thoughts, and ideas are born and carried forward, often transforming into other ideas until he finds that ideas really are all around, you just have to know what to do with them. This title has Common Core connections.


Praise For Ideas Are All Around…

“In all, Stead has given readers a deeply felt, deeply connected story that is homage to creation—and really quite brilliant.”—Kirkus Reviews, starred review

“Stead’s bits and pieces of drawing and observation, his willingness to lay bare his uncertainty, and his rough sketches of the natural world don’t form a polished or seamless whole. Yet their very fragmentariness tells an important truth about the way artists begin to create.”—Publishers Weekly, starred review

"It will reward those receptive to the notion that the world speaks to those who
listen."—The Horn Book