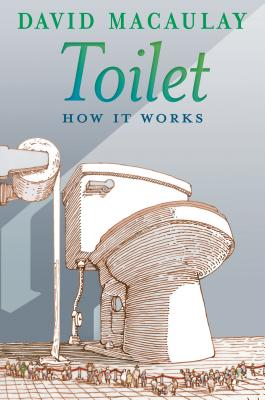 Celebrated author-illustrator and master explainer David Macaulay brings his unique voice and style to high-interest nonfiction books for newly independent readers.
Everyone knows what a toilet is for, right? But what exactly happens after you flush? Where does our waste go, and how is it made safe? With his unique blend of informative text and illustration, David Macaulay takes readers on a tour of the bathroom and the sewer system, from the familiar family toilet to the mysterious municipal water treatment plant.
A Kirkus Reviews Best Book of 2013


Praise For Toilet: How It Works…

“In his signature squiggly style, Macaulay pulls back the curtain to show just how it all goes down(so to speak).” —Booklist

“A perfect blend of humor and clarity - in text and in artwork - explains the anatomy of human waste, the mechanics of a flush toilet and the subsequent treatment of waste in septic and sewer systems.” —Kirkus Reviews, starred review

“A unique nonfiction offering that deals with human waste in a way that most other books have not. . .A boon to those looking to beef up informational offerings to meet Common Core standards.” —School Library Journal, starred review

“Macaulay reminds readers that while such language is precise, it can also be lively.” —The Horn Book

Born on December 2, 1946, David Macaulay was ten when his family moved from England to the United States. An early fascination with simple technology and a love of model making and drawing ultimately led him to study architecture at the Rhode Island School of Design. He received his degree in 1969 after spending his fifth year with RISD’s European Honors Program in Rome. The next four years were spent working in interior design, teaching junior and senior high school art and tinkering with the idea of making books. The tinkering paid off. His numerous awards include the MacArthur Fellowship, the Caldecott Medal, won for his book Black and White, the Boston Globe–Horn Book Award, the Christopher Award, an American Institute of Architects Medal, the Washington Children’s Book Guild Nonfiction Award, the Deutscher Jugendliteraturpreis, the Dutch Silver Slate Pencil Award, and the Bradford Washburn Award, presented by the Museum of Science in Boston to an outstanding contributor to science. He was U.S.nominee for the biennial, international Hans Christian Andersen Award in both 1984 and 2002. Macaulay currently lives with his family in Vermont.

Sheila Keenan is an established author of fiction and nonfiction, including Greetings from the 50 States; Animals in the House: A History of Pets and People; O, Say Can You See? America’s Symbols, Landmarks, and Inspiring Words; and Gods, Goddesses, and Monsters: A Book of World Mythology. Her book, Dogs of War, is a graphic novel of historical fiction based on the role of dogs in the military.
Loading...
or support indie stores by buying on