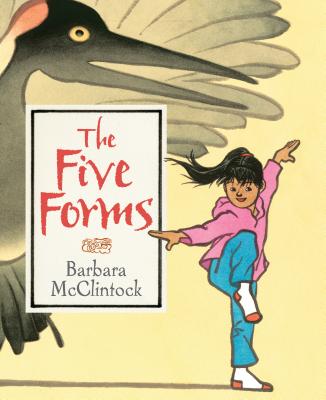 When a young girl finds a mysterious, discarded book of martial arts poses, she ignores the warning printed in bold inside its cover: DO NOT ATTEMPT THESE FORMS WITHOUT AN EXPERIENCED TEACHER! She decides to attempt them herself . . . but is shocked to find that doing so conjures real animals right into her home! The chaos escalates as she releases a leopard, a snake, and a dragon, each creature larger and more destructive than the last. It is only once she manages the fifth and final form that things return to normal. But will she be able to clean up the mess she’s created before her mother returns home?


Praise For The Five Forms…

“There is something irresistible about McClintock's painterly illustrations . . . A young reader will naturally find joy in the utter destruction the forms of the title release, as well as in how sensibly the story's heroine deals with the mess.” —New York Times

“Parents who read this book to small children should brace themselves for a lot of exuberant kicking and whacking afterward.” —The Wall Street Journal, “Best New Children's Books”

“Young martial arts students will recognize the need for masters to harness the power of the mind; that this practitioner wears a pink hoodie makes such power seem in the reach of any kid.” —Publishers Weekly, starred review

“Humorous ink, gouache, and watercolor paintings are expressive and bright, with the books and dolls in the girls room flinging around gleefully . . This joyful story will tickle young readers.” —School Library Journal

Barbara McClintock attended Jamestown College in North Dakota until, at nineteen, she moved to New York City to begin her career as an illustrator and author. She has written and/or illustrated many acclaimed books for young readers, among them Adèle & Simon, an ALA Notable Book and a New York Times Book Review Best Illustrated Book of the Year, and Lost and Found: Adèle and Simon in China. She lives in Windham, Connecticut.
Loading...
or
Not Currently Available for Direct Purchase