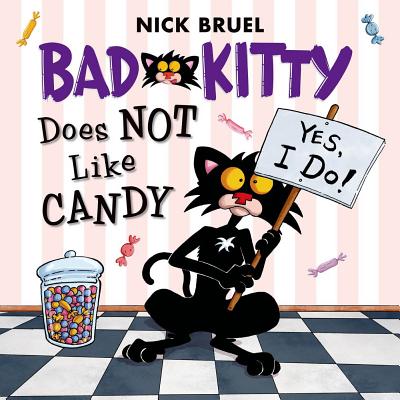 Kitty's back in two brand new stories, complete with a sheet of colorful stickers in an 8x8 format—in this hilarious story, it's time to feed Kitty but all she wants is candy. Will Kitty prevail and get what she wants?

It's dinnertime and Bad Kitty is hungry. What should she eat for dinner?

Fish? Nope!
Beef? Ew!Octopus? Gross!
Bad Kitty knows exactly what she wants. Candy! And nothing will stand in her way.

Find out what will stop Kitty from eating all the candy in the world in this bright, hilarious picture book from New York Times bestselling author Nick Bruel's beloved Bad Kitty series. Bad Kitty Does Not Like Candy is purrr-fect for young readers who love kitties, candy, and a little bit of chaos!

“BAD BEHAVIOR!” —The Horn Book on A Bad Kitty Christmas

“A witty and original take on the old Christmas Eve chestnut, with a sweet twist to season the fun.” —Kirkus Reviews on A Bad Kitty Christmas

“* An alphabet book that should be in every collection. Even the alphabet-experienced will love this bad, bad kitty!” —Kirkus Reviews, starred review on Bad Kitty

“* Will have youngsters howling with laughter.” —Publishers Weekly, starred review on Bad Kitty

Nick Bruel is the author and illustrator of the phenomenally successful New York Times bestselling Bad Kitty series, including the 2012 and 2013 CBC Children's Choice Book Award winners Bad Kitty Meets the Baby and Bad Kitty for President. Nick has also written and illustrated popular picture books including Who Is Melvin Bubble?, Bob and Otto, and his most recent, A Wonderful Year. He lives with his wife and daughter in Westchester, New York.
Loading...
or support indie stores by buying on