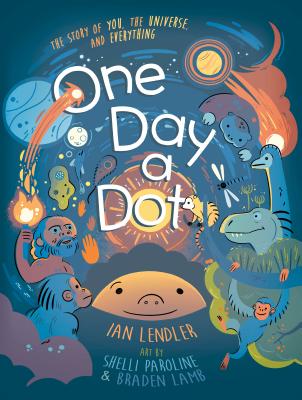 One Day a Dot

The Story of You, The Universe, and Everything

One Day a Dot explores the age-old question: Where did we come from? Where did everything come from?

Starting with one tiny dot and continuing through the Big Bang to the rise of human societies, the story of our universe is told in simple and vivid terms. But the biggest question of all cannot be answered: Where did that one dot come from?

One Day a Dot is a beautiful and vibrant picture book that uses the visual motif of circles as to guide young readers through the stages of life on Earth.


Praise For One Day a Dot: The Story of You, The Universe, and Everything…

"In a style evocative of a documentary film, Paroline and Lamb’s silkscreenlike artwork in quiet earth tones portrays the progression of creatures from simple to complex...Spirited debates are sure to follow."—Publishers Weekly, starred review

"It’s rare (if not unique) to see subject matter like this offered to this age group, but One Day a Dot is a gentle invitation into a much wider and deeper universe that will prove wonderfully satisfying even as it sparks an infinite array of questions about the nature of humanity itself. "—Booklist, starred review

Ian Lendler is the author of the acclaimed Stratford Zoo graphic novel series and the picture books, Undone Fairy Tale, Saturday, and One Day A Dot. He is at one with the universe, but only when eating pizza. He lives near San Francisco, CA.

Shelli Paroline escaped early on into the world of comics, cartoons, and science fiction. She has returned to the Boston area, where she is an unassuming illustrator and co-director of the Massachusetts Independent Comics Expo. Shelli has contributed to Adventure Time comics.

Braden Lamb grew up in Seattle, studied film in upstate New York, learned about vikings in Iceland and Norway, and began an art career in Massachusetts. Now he draws and colors comics, including Adventure Time, and wouldn’t have it any other way.
Loading...
or support indie stores by buying on
(This book is on backorder)