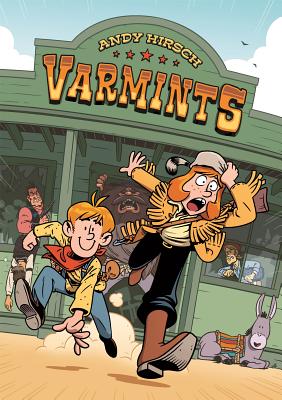 Opie and Ned are adrift in the Old West, searching for the man who shot their Ma. These two youngsters only have each other, but with all their squabbling it's a miracle they still have that.

When they get wind of the mysterious Pa ("crime kingpin of the West!"), Opie and Ned suddenly have something new: a mission. But tracking down the elusive (and deadly) Pa is going to take all the wiles these two kids have, and some new friends to boot.

Clever, explosive, and deeply moving by turns, Varmints is a perfect middle-grade comedy graphic novel. Hirsch brings an old-school Western style to bear on a story full of nuance, humor, and surprises.

"In a series of set-piece chapters, Hirsh chucks the young searchers into saloon brawls, gunfights, and encounters with a massive mountain man clad in a bearskin onesie and a motherly if larcenous woman of low virtue, among other dust-ups."—Kirkus

"...kids who want to sign on for more Wild West mayhem are bound to get their wish."—BCCB

Andy Hirsch is a cartoonist and illustrator living in Dallas, Texas. The third of four children, he was born in Minnesota, migrated to Texas at a young age, and studied comics in Savannah, Georgia. He previously illustrated the graphic novel The Royal Historian of Oz, which was listed as a 2013 YALSA Great Graphic Novel for Teens, and has contributed to the Garfield, Regular Show, Adventure Time, and Peanuts comic book series.
Loading...
or
Not Currently Available for Direct Purchase