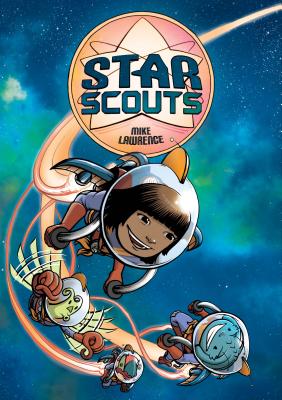 Avani is the new kid in town, and she’s not happy about it. Everyone in school thinks she’s weird, especially the girls in her Flower Scouts troop. Is it so weird to think scouting should be about fun and adventure, not about makeovers and boys, boys, boys?

But everything changes when Avani is “accidentally” abducted by a spunky alien named Mabel. Mabel is a scout too—a Star Scout. Collecting alien specimens (like Avani) goes with the territory, along with teleportation and jetpack racing. Avani might be weird, but in the Star Scouts she fits right in. If she can just survive Camp Andromeda, and keep her dad from discovering that she’s left planet Earth, she’s in for the adventure of a lifetime.

Mike Lawrence is the award-winning illustrator of Muddy Max: The Mystery of Marsh Creek (with Elizabeth Rusch) and the novel The Incredible Adventures of Cinnamon Girl (by Melissa Keil). The Star Scouts series (published by First Second) is his debut as a solo graphic novelist. In addition to making comics, Mike has created several pieces of public art for his hometown of Portland, Oregon, where he lives with his wife and two sons.

"The characters are engaging, the message focuses on teamwork, and the book is a lot of fun." —Paste Magazine, from their "10 Best Kids Comics of 2017"

"Lawrence's illustrations are bright and dynamic, driving the action across (and down, and around) each page." —Shelf Awareness, starred review

"It’s an exciting, laugh-a-minute story that plainly reveals the rewards of teamwork, whatever planet one calls home." —Publishers Weekly

"This is a gorgeous book, with lush imagery." —School Library Journal

"The fact that much of this graphic novel takes place away from Earth gives Lawrence both visual and textual freedom, and the odd, nifty landscapes and madcap, unexpected camp adventures demonstrate his creative flair." —Bulletin of the Center for Children's Books

"With a diverse cast of human girls and lots of supportive riendships at its heart, this gratifying comic will please fans of Craig Thompson’s Space Dumplins." —Booklist