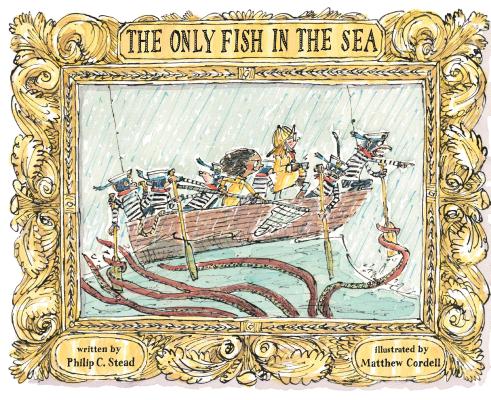 The Only Fish in the Sea (Hardcover)

Did you hear about little Amy Scott? She got a goldfish for her birthday and then just threw it in the ocean! That doesn’t seem right.

I guess Sherman and Sadie will have to go save little Ellsworth (every fish deserves a proper name) on their own. They’ll need:

Don’t worry. Ellsworth is in good hands now, but what ever happened to little Amy Scott?

Join Sadie (Special Delivery) on another adventure in The Only Fish in the Sea, a delightful picture book by Philip C. Stead and Matthew Cordell.

Matthew Cordell is the author and illustrator of Caldecott award winner Wolf in the Snow, Trouble Gum, Another Brother, hello! hello!, and Wish. He has illustrated the books of renowned authors including Philip Stead (Special Delivery), Rachel Vail (the Justin Case series), and Gail Carson Levine (Forgive Me, I Meant To Do It). He lives outside of Chicago with his wife, the novelist Julie Halpern, and their two children.

Praise For The Only Fish in the Sea…

*"This is comforting fare for children, especially those who themselves have been cast adrift, and sensitive readers in more secure situations may even spare some sympathy for Little Amy."—Booklist, starred review

*"Readers who are looking for more moxie in their lives will love this absurd adventure."—Kirkus Reviews, starred review

"Throughout, Cordell’s style is reminiscent of Quentin Blake’s work, with comically perilous seafaring scenes that recall the Miss Armitage picture books. Meanwhile, Stead’s text contains echoes of Dahl’s writing, with moments of dark humor, a satisfying comeuppance for Little Amy Scott, and a surfeit of heart in the child heroes’ rescue of lost Ellsworth."—Horn Book