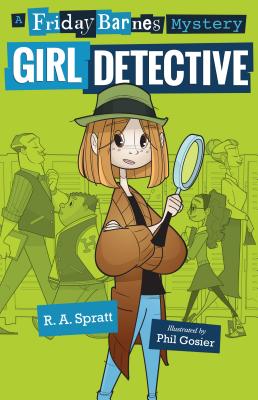 A Bank Street Best Children's Book of the Year, 2017

Imagine if Sherlock Holmes was an eleven-year-old girl!

When Friday Barnes, girl genius, solves a bank robbery, she uses the reward money to send herself to Highcrest Academy, the most exclusive boarding school in the country—and discovers it's a hotbed of crime!

Soon she's investigating everything from disappearing homework to the terrifying Yeti haunting the school swamp. But the biggest mystery yet is Ian Wainscott, the handsomest (and most arrogant) boy in school who inexplicably hates her. Will the homework be found? Can they ever track down the Yeti? And why is Ian out to ruin her?

With black-and-white art throughout, Friday Barnes, Girl Detective is the launch of an exciting new mystery series that "will keep readers laughing from start to finish." (Publishers Weekly)

R.A. Spratt is an award-winning author and television writer. Her Nanny Piggins series went into nine best selling volumes in Australia. She lives in Bowral, Australia with her husband, two daughters and a puppy called Henry. Like Friday Barnes, R.A. enjoys wearing a silly hat.

Phil Gosier is an independent art director and designer working in the Washington, D.C. area. His illustration and design clients include Kellogg's, the Discovery Channel, Marvel and DC Comics, and Macmillan, where he illustrates the Friday Barnes Mystery series as well as his own picture books, including Snow Beast Comes to Play. He graduated from the University of Maryland and lives in suburban Maryland with his family.

"With off-the-wall plot turns and small mysteries scattered throughout, this is the perfect choice for mystery fans with a silly sense of humor, and the cliff-hanger ending promises more sleuthing on the horizon. Gosier’s black-and-white spot illustrations add to the charming atmosphere. A sheer delight." —Booklist, starred review

"Spratt begins this new series with a nifty, engaging protagonist who can keep readers laughing and help young geeks feel good about themselves... Delightful, highly logical, and well-informed fun." —Kirkus

“Snappy and smart. [R.A. Spratt's] clever plotting moves the action right along. Everything ends with a giant cliffhanger, which will definitely leave readers ready for more.” —BookPage