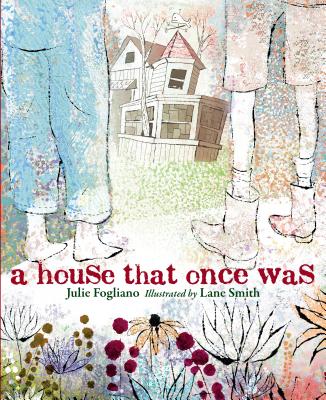 A House That Once Was

“Accompanied by Lane's evocative art that suggests layers of history, Fogliano's story turns this childhood scenario into a radiant poem about the mysteries of other people and the wonderfulness of home.” —New York Times

Deep in the woods
is a house
just a house
that once was
but now isn’t
a home.

Who lived in that house? Who walked down its hallways? Why did they leave it, and where did they go?

Two children set off to find the answers by piecing together clues found, books left behind, forgotten photos, and discarded toys, creating their own vision of those who came before, in this deeply moving tale of imagination by Ezra Jack Keats Award–winning author Julie Fogliano and Caldecott Award–winning illustrator Lane Smith.


Praise For A House That Once Was…

“Perfectly seamless; words and art are interwoven in a dance that enchants. Inventive and lovely.” —Kirkus Reviews, starred review

“A wizard of wordplay and a maestro of composition combine their considerable talents to explore the notion of home . . . Stirring to the eye and the spirit, this evocative book repays frequent readings.” —School Library Journal, starred review

“Imaginative and colorful.” —Bulletin of the Center for Children's Books

If You Want to See A Whale:

“Fogliano's words are carved and measured. This is a writer who takes her time, and the leaps she makes with language surprise and thrill.” —The New York Times

“A gorgeous love song to the imagination . . . It's breathtaking . . . Fans will be waiting.” —Booklist, starred review

“Readers will gape at the two enormous, whale-sized talents at work in this transfixing picture book.” —Kirkus Reviews, starred review

And Then It's Spring:

“In an understated and intimate partnership, Fogliano and Stead conjure late winter doldrums and the relief of spring's arrival, well worth the wait.” —Publishers Weekly, starred review

“Many treasures lie buried within this endearing story, in which humor and anxious anticipation sprout alongside one another.” —Kirkus Reviews, starred review

“[Lane Smith's] illustrations, a blend of line drawings and sponge painting, have a classic feel, and make clever use of the topiary theme, rewarding close examination and repeated reading.” —The New Yorker

“It's a rare glimpse into Smith's softer side—as skillful as his more sly offerings, but crafted with honesty and heart.” —Publishers Weekly, starred review

“Visually intriguing and emotionally resonant, this is a book to pore over and talk about.” —School Library Journal, starred review

“Sketched with a finely lined fairy-tale wispiness and dominated by verdant green, the illustrations are not just creative but poignant.” —Booklist

Julie Fogliano is the New York Times bestselling author of And Then It’s Spring and If You Want to See a Whale as well as the poetry collection, When Green Becomes Tomatoes. Recipient of the 2013 the Ezra Jack Keats award, her books have been translated into more than ten languages. Julie lives in the Hudson Valley with her husband and three children. When she is not folding laundry or wondering what to make for dinner, she is staring out the window waiting for a book idea to fly by.