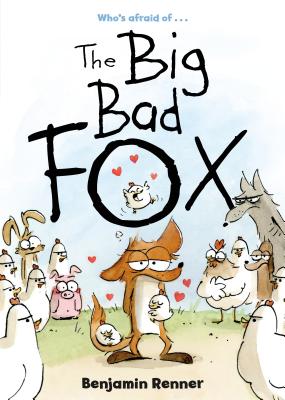 Who’s afraid of the Big Bad Fox? No one, it seems.

The fox dreams of being the terror of the barnyard. But no one is intimidated by him, least of all the hens—when he picks a fight with one, he always ends up on the losing end. Even the wolf, the most fearsome beast of the forest, can’t teach him how to be a proper predator. It looks like the fox will have to spend the rest of his life eating turnips.

But then the wolf comes up with the perfect scheme. If the fox steals some eggs, he could hatch the chicks himself and raise them to be a plump, juicy chicken dinner. Unfortunately, this plan falls apart when three adorable chicks hatch and call the fox Mommy.

Beautifully rendered in watercolor by Benjamin Renner, The Big Bad Fox is a hilarious and surprisingly tender parable about parenthood that's sure to be a hit with new parents (and their kids too).


Praise For The Big Bad Fox…

"Bound to keep adults and kids alike laughing, this is a winning selection for comic book fans, reluctant readers, and those who enjoy subversive comedy." —School Library Journal, starred review

"Graphic novels fans from grades three and up are all going to find some- thing to like here from the art to the humor to the tender underbelly... In a celebratory era of powerful, memorable, visually significant graphic novels, this one happily joins the mountain near the top."— Bulletin of the Center for Children's Books, starred review

"Although this concept of role reversal may be well-trod, Renner handles it deftly, making the predictable feel satisfying. A comically charming underfox tale." —Kirkus

Benjamin Renner is an award-winning French cartoonist, animator, and filmmaker. He received a 2014 Academy Awards nomination in the category of Best Animated Feature for the film Ernest & Celestine. Look for the animated adaptation of his comic, Le grand mechant renard (The Big Bad Fox).
Loading...
or support indie stores by buying on