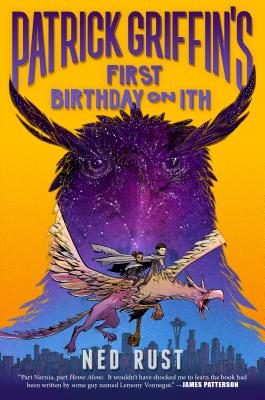 “Recommend to readers who thought A Wrinkle in Time could have been funnier.” —School Library Journal

Breathtaking suspense and surprising twists come together in Patrick Griffin's First Birthday on Ith, the second book of the page-turning Patrick Griffin and the Three Worlds trilogy by Ned Rust.

After learning Earth is about to be destroyed, 12-year-old Patrick Griffin is on a mission. Under the protection of a powerful griffin, Patrick and his friend Oma travel through abandoned cities on the planet Ith, hiding from the enemy while they work out a plan to overthrow the alternate world's sinister government.

Back on Earth, the gigantic jackalope Mr. BunBun and nine adorable numbats race to warn humans about impending doom. But time is running out. The evil Rex Abraham is back on Ith and will stop at nothing to continue his domination of the Three Worlds.

“Recommend to readers who thought A Wrinkle in Time could have been funnier.” —School Library Journal

“There is plenty of comedy along the way, mostly focused around puns or interplanetary misunderstandings. Under the jokey exterior, though, there’s some deep stuff about the way we allow ourselves to be controlled by technology, so the book offers more than just laughs for the perceptive reader.” —The Bulletin

“Part Narnia, part Home Alone. It wouldn't have shocked me to learn the book had been written by some guy named Lemony Vonnegut.” —James Patterson, New York Times-bestselling author

“A terrific read, magic really, an adolescent book for adults, an adult book for adolescents, a funny, wise, enthralling romp from fist page to last . . . So much better than Harry Potter” —Peter Quinn, Author of Hour of the Cat

Ned Rust is the author of the Patrick Griffin and the Three Worlds series as well as the co-author of books in the Daniel X series and Witch and Wizard: The Gift with James Patterson. He lives in Croton, New York, with his wife, son, and daughter.
Loading...
or
Not Currently Available for Direct Purchase