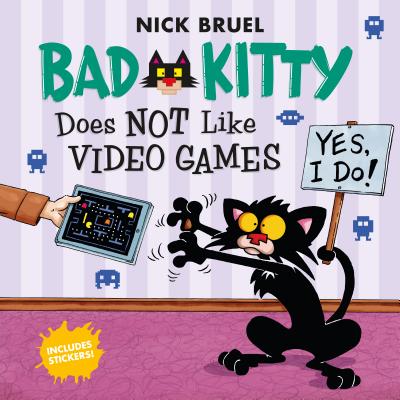 All Kitty wants to do is play her favorite video game. But Kitty has been playing her video game for FIVE hours. Now it's time for Kitty to:

go outside,
draw a picture,
read a book,
do anything other than play video games.

Kitty doesn't want to do any of these things. . . but eventually she does anyway, and discovers that some things are way more fun than video games.

Nick Bruel is the author and illustrator of the phenomenally successful New York Times bestselling Bad Kitty series, including the 2012 and 2013 CBC Children's Choice Book Award winners Bad Kitty Meets the Baby and Bad Kitty for President. Nick has also written and illustrated popular picture books, including A Wonderful Year and Little Red Bird. Nick lives with his wife and daughter in Pleasantville, New York.
Loading...
or support indie stores by buying on