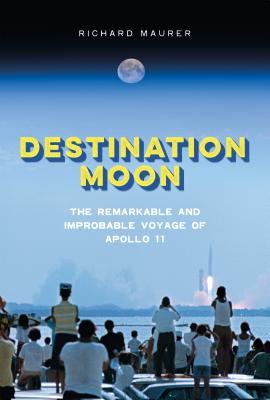 The Remarkable and Improbable Voyage of Apollo 11

The history of NASA's Apollo program from Earth orbital missions to lunar landings in a propulsive nonfiction narrative.

Only now, it is becoming clear how exceptional and unrepeatable Apollo was. At its height, it employed almost half a million people, many working seven days a week and each determined that “it will not fail because of me.”

Beginning with fighter pilots in World War II, Maurer traces the origins of the Apollo program to a few exceptional soldiers, a Nazi engineer, and a young eager man who would become president.


Praise For Destination Moon: The Remarkable and Improbable Voyage of Apollo 11…

*"An absorbing, insightful, solidly informative resource for readers who want to understand the U.S. space program from the ground up."—Booklist, starred review

*"Inspiring, fascinating, and, like the millions of parts that had to function for the space program to succeed, practically perfect."—Kirkus Reviews, starred review

Richard Maurer is a writer, photo researcher, and exhibit designer. His books for young readers include The Wright Sister: Katharine Wright and her Famous Brothers. The Wild Colorado, winner of the Western Writers Spur Award, and Airborne: The Search for the Secret of Flight, winner of the American Institute of Physics Science Writing Award. A native of West Texas, he now lives in Central Massachusetts with his wife and two sons.
Loading...
or support indie stores by buying on